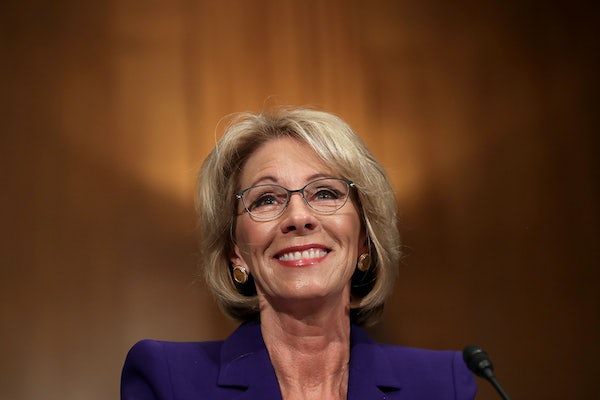 Betsy DeVos is no hero.

The secretary of education released a pointed statement last night in response to the Trump administration’s withdrawal of the Obama-era federal guidelines that would have allowed transgender students to use bathroom facilities according to their gender identities. In the statement, she apparently sought to lay out in public what has been her own reportedly independent position, which was overruled in favor of Attorney General Jeff Sessions:

We have a responsibility to protect every student in America and ensure that they have the freedom to learn and thrive in a safe and trusted environment. This is not merely a federal mandate, but a moral obligation no individual, school, district or state can abdicate. At my direction, the Department’s Office for Civil Rights remains committed to investigating all claims of discrimination, bullying and harassment against those who are most vulnerable in our schools...

I have dedicated my career to advocating for and fighting on behalf of students, and as Secretary of Education, I consider protecting all students, including LGBTQ students, not only a key priority for the Department, but for every school in America.

But what does this even mean, when the administration’s LGBT policies are being run by the likes of Jeff Sessions and Vice President Pence? And as has been noted, DeVos caved after raising the issue that transgender students have high rates of suicide and suicide attempts. So she knows what the consequences are.

DeVos nevertheless chose to go along with the administration’s collective policy, instead of taking the option to resign. There are no heroes in the Trump cabinet—they signed up for all of it, the bad and the ugly.