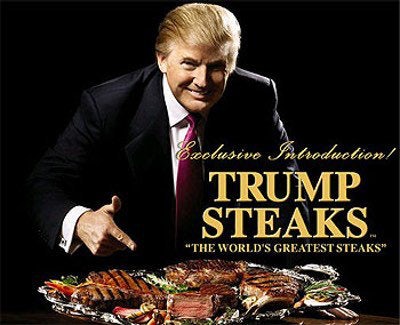 The president of the United States eats his $54 steak with ketchup.

We already knew that Donald Trump likes his steaks well done. (“It would rock on the plate, it was so well done,” his longtime butler at Mar-a-Lago revealed.) But Benny Johnson at Independent Journal Review has discovered that Trump regularly commits an even greater culinary crime: He eats his desiccated steaks with ketchup. According to an anonymous waiter at BLT Steakhouse at the Trump International Hotel in Washington, D.C., Trump on Saturday night “ordered a well-done steak. An aged New York strip. He ate it with catsup as he always does.”

As he always does. This man is a child. Why bother ordering a ridiculously expensive dry-age steak? What difference could the dry-aging process possibly make when you’re just going to slather it with child’s sauce? And why is this sauce referred to as “catsup,” instead of “ketchup”? To think people used to give Barack Obama shit for eating his burgers with mustard.