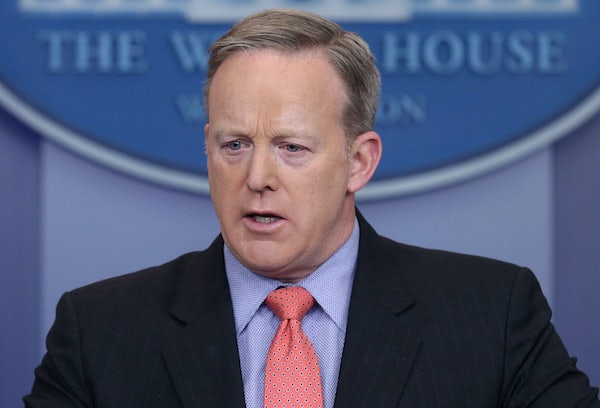 Sean Spicer had a worse weekend than La La Land.

Press secretaries are almost always the least-loved members of any presidential administration—their entire job is to do stuff that makes you hate them, like lie and yell. But even for a White House press secretary, Spicer is hated—and not just because of the lying and yelling but because of how pathetic the lying and yelling is. Spicer seems to do everything—tan, dress, lie, and yell—to please his boss, and yet nothing works. Spicer has not yet escaped Donald Trump’s dog house.

But Spicer’s last 24 hours have been bad even by Sean Spicer’s standards. First, it was reported that Spicer led a secret police–style phone check during a surprise meeting:

“Last week, after Spicer became aware that information had leaked out of a planning meeting with about a dozen of his communications staffers, he reconvened the group in his office to express his frustration over the number of private conversations and meetings that were showing up in unflattering news stories, according to sources in the room. Upon entering Spicer’s office for what one person briefed on the gathering described as ‘an emergency meeting,’ staffers were told to dump their phones on a table for a ‘phone check,’ to prove they had nothing to hide. Spicer, who consulted with White House counsel Don McGahn before calling the meeting, was accompanied by White House lawyers in the room, according to multiple sources.

This is bad not only because it’s intrusive and pathetic, although it’s certainly intrusive and pathetic. This is bad because, after a week in which many pundits were praising the Trump administration for not crashing and burning with the usual intensity, targeting one’s own staff like this suggests that the White House is still gripped by turmoil and uncertainty. That this meeting also leaked is hilarious and fitting and only makes that point clearer. Finally, surprise investigations like this undercut the White House’s (obviously dishonest) defense when responding to leaks, which is that the stories are “fake news” invented by journalists.

Then, Navy secretary nominee Philip Bilden withdrew. Normally this would not reflect poorly on a press secretary except:

This, as Matt Yglesisas wrote over the weekend, perfectly encapsulates Spicer’s credibility problem and the many problems with the administration’s strategy of lying about all things, big and small. If that wasn’t bad enough, around the same time, Spicer decided to kick up some shit because the New York Times got his birthplace wrong. But, as usual, there was a problem:

Spicer then got owned by Jake Tapper.

And finally, on Monday morning, Axios Presented By Enron reported that Spicer arranged contacts between members of the intelligence community and Congress and the media to push back on reporting alleging that members of the Trump campaign were in constant contact with Russian intelligence officials during the election. Spicer arranged for CIA Director Mike Pompeo, Senate Select Intelligence Committee Chair Richard Burr, and House Intelligence Committee Chair Devin Nunes to defend the administration to the press. The administration then used their comments as proof that the Russia story was concocted by the media and their political opponents. In some cases, Axios reports, Spicer even stayed on the line during the call—the Trump administration’s defense of the Russia scandal is now tainted by Spicer’s heavy breathing.