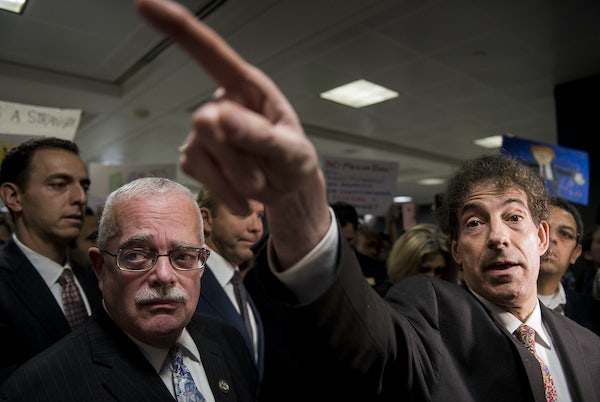 While insisting it was “for practice purposes only,” Maryland Representative Jamie Raskin led progressive activists in a characteristically nerdy chant at a town hall on Sunday night in Silver Spring: “Stop Trump! Stop Pence! Impeach them for emoluments!”

It doesn’t have quite the same ring as “lock her up!” But the crowd gamely kept it going even after Raskin left the stage:

After the town hall, Raskin told me he isn’t calling for impeaching President Donald Trump right now—at least not in the legal sense. But he also made clear he isn’t ruling anything out.

“We are actively impeaching Donald Trump and his administration every day in terms of exposing the lies,” he said. “In terms of the legal impeachment process, that’s obviously something on a lot of people’s minds, but one thing we know about it—looking at it historically—is it’s a totally political question. I don’t think people should fetishize it. I don’t think people should obsess about it. But I think it’s a tool in the toolkit we need to be aware of. It’s absolutely on the table.”

Maryland Senator Chris Van Hollen, who represented Raskin’s congressional district before he switched chambers in Congress last year, was more restrained on the subject. “I’m not calling for impeachment,” he told me.

When I pressed Van Hollen on whether he’s leaving the option on the table, he changed the subject. “We’re going to hold Trump accountable in every way,” he said. “We’re actively pushing for maximum investigation of potential collaboration with the Russians in the election. We’re going to pursue the conflict of interest laws and violation of the Emoluments Clause vigorously, which means we’ll continue to push for the release of tax returns.”

These divergent stances aren’t entirely surprising. Raskin is a vocal progressive who literally took a hike with progressive supporters on the day of Trump’s inauguration. Van Hollen, who chairs the Democratic Senatorial Campaign Committee, is closer to party leadership, which is seeking to tamp down impeachment talk.

As Politico recently reported, “Democratic officials in Republican-dominated Washington view the entire subject as a trap, a premature discussion that could backfire in spectacular fashion by making the party appear too overzealous in its opposition to Trump. Worse, they fear, it could harden Republican support for the president by handing his party significant fundraising and political ammunition when the chances of success for an early impeachment push are remote, at best.”

As long as Democrats keep trying to rhyme with “emoluments,” their chances of success are closer to nil.