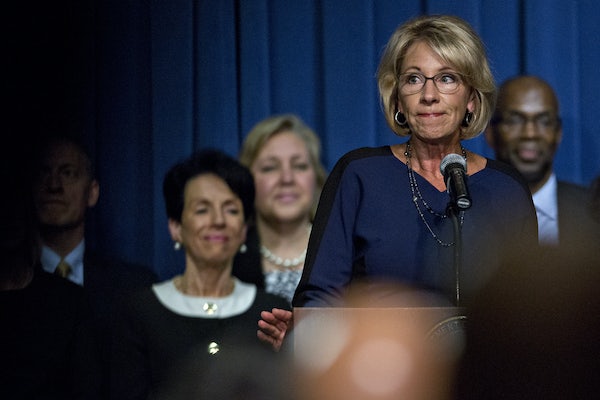 After she and President Donald Trump met with leaders of Historically Black Colleges and Universities at the White House on Monday, the education secretary issued this statement:

They started from the fact that there were too many students in America who did not have equal access to education. They saw that the system wasn’t working, that there was an absence of opportunity, so they took it upon themselves to provide the solution.

HBCUs are real pioneers when it comes to school choice. They are living proof that when more options are provided to students, they are afforded greater access and greater quality.

There’s just one problem. These schools came about precisely because black Americans typically had no choice, no options, and no access to education under segregation. As Dartmouth College professor Brendan Nyhan‏ points out, DeVos’s own department website explains this: “Prior to the time of their establishment, and for many years afterwards, blacks were generally denied admission to traditionally white institutions.”

This isn’t DeVos’s first gaffe since her swearing-in earlier this month. (She managed to insult teachers on what should have been a routine visit to a Washington, D.C., public school.) Yet this incident reinforces a central concern that emerged from DeVos’s confirmation hearing—one that’s separate from the ideological fights over “choice,” charters, vouchers, and the like. Simply put, the education secretary doesn’t seem to know a whole lot about education.

This controversy also comes amid the Trump administration’s effort to increase support for historically black colleges and universities. Trump will reportedly sign an executive order on Tuesday moving an Education Department program promoting these schools under the White House’s purview. DeVos, meanwhile, is slated to speak at a Library of Congress summit congressional Republicans are holding with school leaders. That might be even more awkward than previously anticipated.