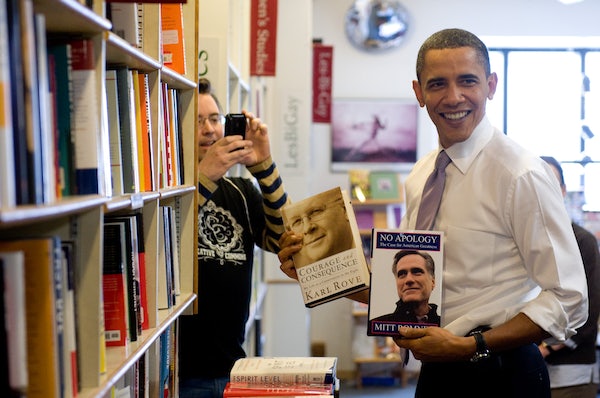 Barack and Michelle Obama are about to get paid.

The Financial Times reports that the former first couple are selling two books as part of a package deal—and that bidding has reached $60 million, which is an insane amount of money. That’s the equivalent of roughly 17 Lena Dunham book deals, six Amy Schumer book deals, or four Bill Clinton book deals.

Clinton got $15 million for My Life, perhaps the dullest book ever written; George W. Bush got $10 million for the almost as boring Decision Points. The point is that books by former presidents sell copies, even though they’re rarely very good. Ulysses S. Grant’s memoirs are the gold standard, and they’re only good because he was dying and broke and needed to make sure his family had money after he died, which he did shortly after he finished writing. But Obama’s track record as a writer—his previous books were both bestsellers—suggests that his book could get a boost from actually being good. Similarly, people are nostalgic for Obama’s presidency already and his book will tap into that energy as long as it comes out in the next three and a half years.

The Financial Times notes Obama’s book earnings: “Mr Obama earned $8.8 million from The Audacity of Hope, a 2006 bestseller, and the children’s book Of Thee I Sing: A Letter to My Daughters, according to a report by Forbes. Sales of his first memoir, Dreams from My Father, published in paperback in 2004, brought in a further $6.8 million in royalties, according to Forbes.” Though the FT seems to be suggesting this is an indication that the Obamas are being overpaid, his hefty royalties in fact suggest his sales record is strong enough to maybe kind of sort of justify paying $60 million.

Still, sixty million dollars sounds like a lot! But it’s for two books and it includes world rights—so you can figure that one book is going for $15 million for North American rights. If the books are sold for $30 each at a standard 50 percent discount, the two books would have to sell four million copies worldwide to hit $60 million in revenue. (Obviously there are production and other costs, so the number is probably slightly—but not significantly—higher.) That’s a lot of copies, but it’s not an outlandish number of copies. (I wrote about how advances work and why a publisher would pay tens of millions for a book back in 2015, if you want more context.)

According to the report, Penguin Random House—the publishing industry’s largest corporation, which was essentially created for the purpose of doing deals like this—is leading the charge, but lesser giants such as Simon & Schuster (which has been in the news a lot lately!), Macmillan, and HarperCollins are contending. Finally, the fact that the deal is for both books is a bit weird—it inflates both advances, despite the fact that they are different books about different things. Similarly, if you want to publish Barack, you have to publish Michelle. (To be fair, I’m pretty sure every major publisher would be perfectly happy to publish either.)

Update: Penguin Random House announced it would be publishing Barack and Michelle Obama’s books, for an undisclosed sum.