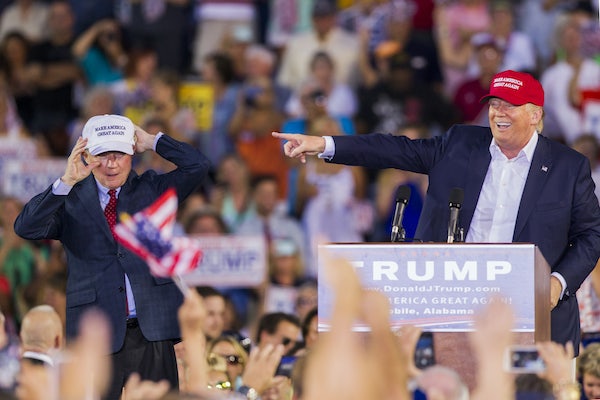 The Great Trump Pivot™ barely lasted one day before Russia ruined everything again.

Twelve hours ago, the White House was jubilant. They had discovered that the bar for acceptable behavior for Donald Trump is set so low, that all he has to do is smile and not say something overtly racist and the pundit class will lose its collective shit. Trump’s address to a joint session of Congress was boring and grotesque, but he sort of looked and sounded like a president. “For once, we had the wind at our sails. We decided not to shit on ourselves,” a top aide told Axios presented by Halliburton, in a quote that was printed without even a hint of irony.

But then a succession of stories quickly engulfed Trump’s moment in the sun. First, The New York Times reported that European allies presented the Obama administration with intelligence suggesting that members of the Trump campaign had met with members of Vladimir Putin’s inner circle in Europe in 2016.

Then, The Washington Post reported that Attorney General Jeff Sessions had spoken with Sergey Kislyak, the Russian ambassador to the U.S., twice during the campaign. This means that Sessions almost certainly perjured himself when he denied such contact during his confirmation hearings. Sessions has tried to wriggle out of the very tight situation he finds himself in, but he’s done a remarkably poor job. First, he issued a denial that read like it was conceived in panic:

But the Post, as Aaron Blake noted this morning, never reported that Sessions had “discussed issues of the campaign” with the Russian ambassador, just that they had met. In its investigation the Post also contacted every member of the 2016 Senate Armed Services Committee to see if any of them had met with the Russian ambassador—none had. It is worth noting that Kislyak is not just a diplomat, but Russia’s top spy-recruiter in D.C., according to U.S. officials who spoke to CNN.

To say that this is very bad for Sessions and the Trump administration is something of an understatement. Sessions is trying to put out this fire by saying that he will recuse himself from the Justice Department’s investigation of Russia’s involvement in the 2016 election. But 22 days into his term as attorney general, he is already the subject of a perjury scandal involving the Kremlin.

Things are arguably worse for the Trump administration, and that’s a good thing if you want to get to the bottom of what really happened between the Trump campaign and the Russian government. They have now lost their shield in the Justice Department and may have to face a special prosecutor. As recent history teaches us, special prosecutors sometimes start investigating things that may not fall under their purview.