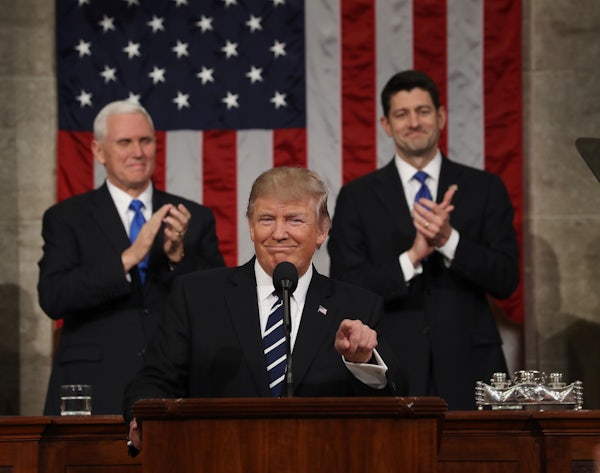 The conventional wisdom from the pundit set is that Trump killed it in Tuesday night’s address to a joint session of Congress. He was so presidential and optimistic and how can anyone oppose him now?

But pundits often conflate what is effective—or what is deemed to be effective—with what is good. There is already evidence that Trump’s speech was effective, that the semi-mythical reluctant Trump voter—the kind of voter who voted for Trump but wishes he would get off of Twitter—liked this comparatively measured speech. Early polling suggests that a clear majority of voters thought Trump did a good job.

But Trump’s speech—halting and dour when it didn’t have the tone of a south Florida real estate video—was good only when judged against the shamefully low bar he has set for himself. (Fran Leibowitz remarked that Donald Trump is a poor person’s idea of a rich person; his attempts at Reaganesque rhetoric came across as a dumb person’s idea of what a smart person sounds like.) It had two primary motifs. One was that the United States would turn 250 ... in nine years. The other was the grotesque exploitation of loved ones of people who have died tragically. These included the widow of the Navy SEAL William Ryan Owens and the families of people who had been killed by undocumented immigrants.

Pundits have often rightfully dinged Trump for his flightiness—aside from a few issues, he is remarkably susceptible to influence and changes his mind frequently without any thought to political strategy. But praising Trump’s speech last night required pundits to have the memories of goldfish. Here, for instance, is The Washington Post’s Chris Cillizza on the speech’s best moments:

Trump hit a few very nice notes: His condemnation of threats against Jewish community centers at the start of the speech was a very nice grace note, and his honoring of the widow of the Navy SEAL killed in the recent Yemen raid was a remarkably powerful moment.

The problem is this: On the very same day that Trump hit these “very nice notes,” he refused to take responsibility for Owens’s death and instead blamed the generals. He also literally suggested that Jews might be desecrating their own cemeteries. Trump’s speech was certainly an attempt to address those controversies, but it didn’t negate them.

There’s a sense in the pundit class that Trump’s speech was a reset button. It wasn’t. Tellingly, even Trump’s own aides don’t think so: