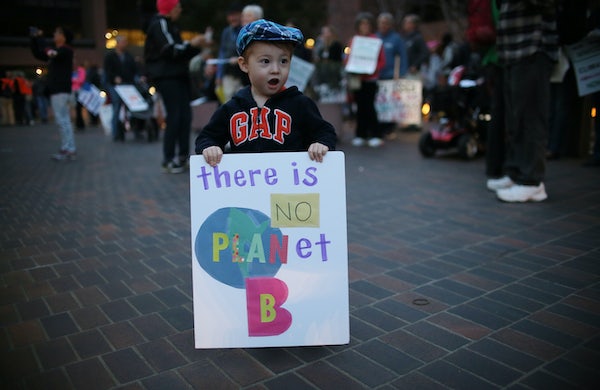 Donald Trump is trying to ruin the EPA, just like he promised.

During the GOP primaries, Trump said of the Environmental Protection Agency, “We are going to get rid of it in almost every form. We’re going to have little tidbits left but we’re going to take a tremendous amount out.” But in the president’s joint address to Congress on Tuesday night, he vowed “to promote clean air and clear water.” Which is it?

The former. Inside EPA reports that Trump’s imminent budget proposal for fiscal year 2018 includes a 25 percent cut to EPA’s budget, which will reportedly manifest in mass layoffs and buyouts, and the end of quite a few popular environmental programs.

Here are a few things in Trump’s budget proposal that have been reported:

The proposed cuts have already drawn bipartisan criticism from former EPA administrators. Gina McCarthy, who served under President Obama, said on Wednesday the cuts are “actually going to be devastating for the agency’s ability to protect public health.” Christine Todd Whitman, who led the Environmental Protection Agency under George W. Bush, also urged the Trump administration on Thursday to reconsider such sweeping cuts.

Even some Republicans on Capitol Hill are critical of the proposal. Representative Mike Simpson of Idaho told The Washington Post he doubted Congress would approve such extreme cuts, saying, “There’s not that much in the EPA, for crying out loud.”