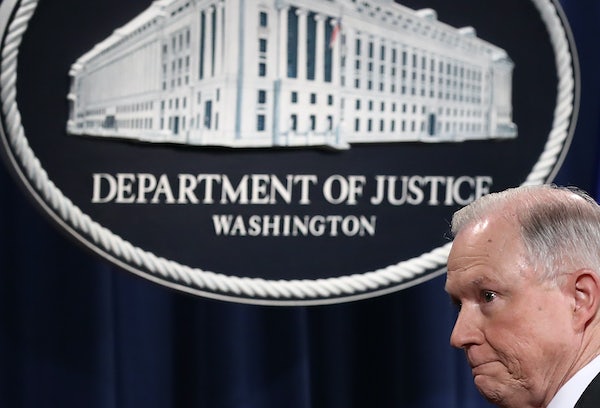 Sessions announced on Thursday that he would recuse himself from the Department of Justice’s investigation into contacts between Trump’s campaign and Russian intelligence agents, after The Washington Post reported that he had lied during his confirmation hearings about his own contacts with the Russian ambassador during the campaign. “I should not be involved in investigating a campaign I had a role in,” Sessions said.

This was what Sessions had to do. By Thursday morning the consensus in both parties was that the attorney general had to recuse himself. But, in characteristic Trump administration fashion, he half-assed it. Sessions’s recusal is partial and limited to investigations of the campaign, which as Ari Melber pointed out on MSNBC, means that he is not recusing himself from the investigation into contacts between Russia and the Trump transition team that occurred after the election. (You will recall that it was in this period that Michael Flynn got into trouble.)

Similarly, Sessions did little to explain why he lied to Congress. In fact, in his statement, he only made the lie seem worse. On Wednesday evening, for instance, Sessions said, “I don’t remember the contents of the meeting” he had with the Russian ambassador. But in a press conference on Thursday he suddenly remembered the conversation in vivid detail:

I don’t remember a lot of it, but I do remember saying I’d gone to Russia with a church group in 1991, and he said he was not a believer himself but he was glad to have church people come there. Indeed, I thought he was pretty much of an old-style Soviet type ambassador.

And so, we talked about a little bit about terrorism as I recall.

And somehow the subject of the Ukraine came up. I had had the Ukraine ambassador in my office the day before. And to listen to him, nothing that Russia—Russia had done nothing that was wrong in any area, and everybody else was wrong with regard to the Ukraine. It got to be a little bit of a testy conversation at that point.

By recusing himself—sort of—Sessions has temporarily stopped the bleeding. It’s possible, given his closeness to Trump and his importance to the administration’s immigration and crime policies, that he’s untouchable. But after the events of the last 24 hours, it looks like he’s one revelation away from losing his job.

And, even with this recusal, his influence will still hang over any investigation of Trump. It’s still his Department of Justice, and any investigation will therefore be tainted by Sessions. An independent investigation is becoming more of a possibility with each new revelation, and that is very bad news for Trump indeed.