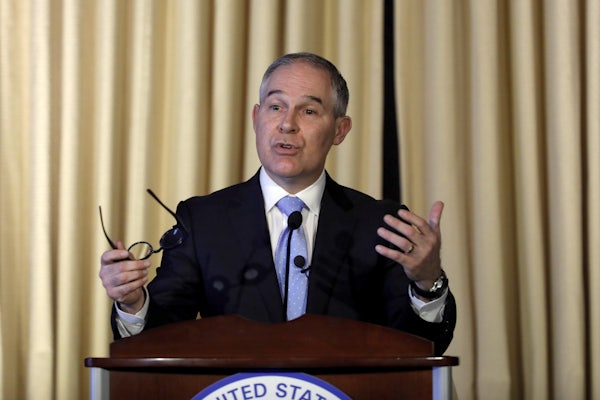 Scott Pruitt wasted no time in granting his first favor to the oil and gas industry.

On Wednesday, Republican state officials from fossil fuel–heavy states sent a letter to Pruitt, the new administrator of the Environmental Protection Agency, asking him to withdraw an Obama-era request for methane emissions information from oil and gas companies. “Many companies involved with this request cannot afford the time and expense of complying with an empty, heavily regulatory burden,” the letter stated. “We sincerely hope that the era of regulatory harassment is over...”

Late Thursday afternoon, the EPA announced that oil and gas companies no longer have to report to the agency how much methane they’re emitting. In a statement, Pruitt, who has close ties to the fossil fuel industry, said he wants to “assess the need for the information”—meaning that he’s considering whether it’s actually necessary to regulate methane from existing oil and gas operations, which had long complained about the Obama administration’s effort to regulate methane.

Oil and gas operations are the largest emitters of methane, a powerful greenhouse gas that is currently unregulated by the federal government (the Obama administration had proposed regulations, but they were not implemented). It is also largely unknown exactly how much methane is leaking from American oil and gas operators. By the EPA’s latest estimate, about 11 percent of U.S. greenhouse gas emissions comes from methane—30 percent of which comes from oil and gas, followed closely by cow farts (yes, really).