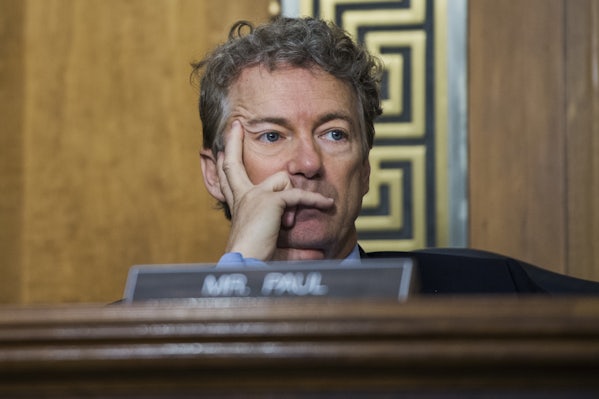 Lots of conservatives are mad about Trumpcare, too.

Republicans have been itching to repeal and replace Obamacare for years, but the House GOP’s newly unveiled American Health Care Act—which President Donald Trump embraced but said would be negotiated—is now drawing sharp criticism on the right. The sniping is evidence that the party is hardly united on the issue of health care reform, with hardline conservatives saying the AHCA doesn’t go far enough, and others pointing out that it would likely make health care unaffordable for millions of Americans.

Kentucky Senator Rand Paul and Rep. Justin Amash are in the former camp, as is the political arm of the Heritage Foundation:

Not to be outdone, Michael F. Cannon at the libertarian Cato Institute wrote a piece titled “The House GOP Leadership’s Health Care Bill Is ObamaCare-Lite—Or Worse,” declaring, “This bill is a train wreck waiting to happen.”

Avik Roy, one of the most respected voices on health care in conservative circles, largely liked the legislation, but he nevertheless tore into “the bill’s stubborn desire to make health insurance unaffordable for millions of Americans, and trap millions more in poverty.” Peter Suderman at Reason criticized Republicans for failing to put a price tag on the legislation, for being fuzzy on details, and for lacking a clear vision of what they want to do: “This bill, and the aura of secrecy surrounding it, seems more like a wish and a hope that this essential problem goes away rather than an attempt to truly solve it.”

Given the speed with which the GOP hopes to move this half-baked bill through Congress, that sounds about right.