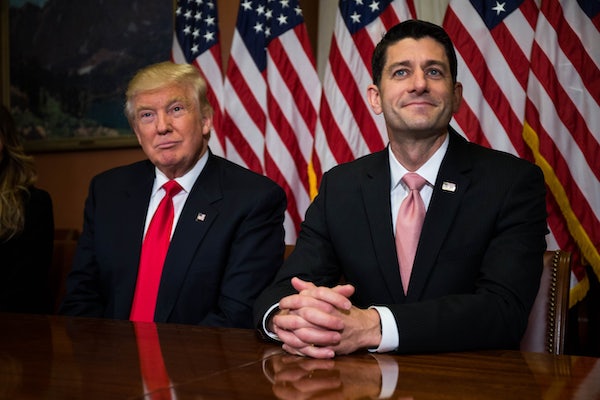 If Trumpcare goes down, Paul Ryan is going to get the blame.

Everybody hates the American Health Care Act. Conservatives hate it, “moderate” Republicans hate it, liberals hate it. It was clear almost immediately after it emerged from the Mission: Impossible bunker in which it was kept in the utmost secrecy that the bill was dead on arrival. For it to succeed, Donald Trump would have to go the full LBJ, cajoling and intimidating congressman nonstop for weeks.

Will Trump put his self-proclaimed label of “world’s best negotiator” to the test? On Wednesday, CNN reported that Trump “is going all-in on the House plan to replace Obamacare, deploying the full power of his office to become the face of controversial legislation that is stirring a conservative revolt”:

Privately, the president was even more explicit, warning the House GOP vote counters of the disastrous political consequences if they fail to corral sufficient votes. One source told CNN that Trump warned his guests that not passing a repeal bill could result in a “bloodbath” for the party in mid-term elections in 2018.” He said he hopes members understand that,” the source said, adding that as conservatives come to understand the consequences of failure, they will rethink their positions.

But Trump has distanced himself from the bill publicly. His first tweet about the bill highlighted the fact that it was open to negotiation. On Wednesday morning, Kellyanne Conway whined that it was unfair to call the bill “Trumpcare,” telling Fox News, “I didn’t hear President Trump say to any of us, ‘Hey I want my name on that.’”

And, despite reports of Trump going “all in,” his allies on the right are already maneuvering to blame Paul Ryan if the bill fails to move forward.

Trump’s inner circle is simultaneously pushing stories that suggest the president is fully behind the bill and that Paul Ryan should be blamed if it fails. This could be a way to pressure Ryan to get House Republicans in line. But it also suggests that the Trump White House realizes the prognosis for the bill is dire. That this bill has also infuriated and alienated Ryan’s conservative allies only makes his position more precarious.

On the one hand, it’s not really fair to Ryan, who is in an impossible position, stuck between Trump’s demands and that of his insane caucus. On the other, it’s hard to argue that Ryan doesn’t have this coming, because he’s been pushing bogus ideas about health care for seven years.