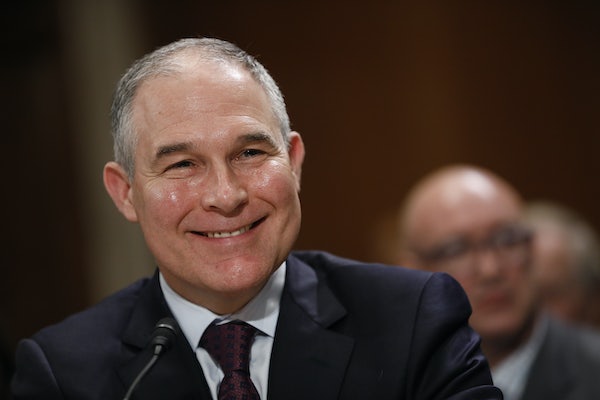 Until today, the new head of the Environmental Protection Agency has walked a fine line between accepting and denying climate science. He’s been careful not to explicitly deny that humans cause climate change, claiming only that the debate is “far from settled” (false), and he’s dodged questions about whether he accepts the science. In his confirmation hearing, Pruitt said his “personal opinion” on climate change “is immaterial to the job” of being EPA administrator.

But now that Pruitt’s all settled in at the EPA, he’s getting a little less shy. In a CNBC interview on Thursday morning, Pruitt explicitly said that carbon dioxide doesn’t cause global warming. “I think that measuring with precision human activity on the climate is something very challenging to do and there’s tremendous disagreement about the degree of impact,” Pruitt said. “So no, I would not agree that it’s a primary contributor to the global warming that we see.”

In every administration dating back to the 1980s—even Republican administrations—the head of the EPA has accepted the scientific truth that our planet is warming because of an increase of carbon dioxide in the atmosphere, which is caused by fossil fuel emissions—in other words, humans. And despite what Pruitt claims, his personal opinion about climate science is indeed material to his position as the head of the agency that’s supposed to protect public health and the environment. The World Health Organization calls global warming “among the greatest health risks of the 21st Century.” How is Pruitt going to protect Americans from that risk if he doesn’t think it exists?