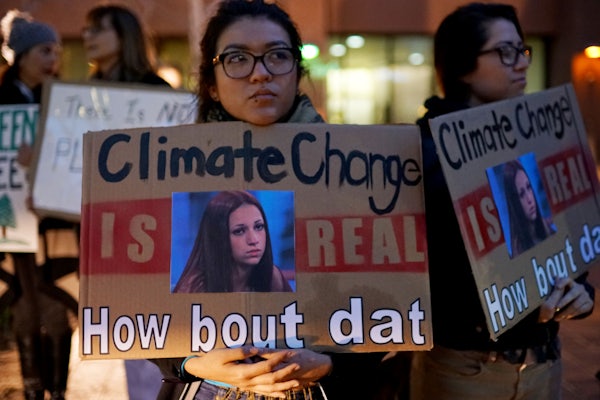 Trump’s climate change battle with a bunch of kids is heating up.

Trump’s Justice Department made moves this week to kill a lawsuit filed by 21 kids alleging the federal government has screwed them over when it comes to climate change. Specifically, the Washington Post reports, Trump’s lawyers asked a federal court this week to overturn a November ruling that cleared the lawsuit for trial. They’ve also filed a motion to halt the case immediately, saying the government would be “irreparably harmed” if made to produce documents the kids are asking for.

The plaintiffs, who range from ages eight to 19, are asking for 60 years worth of federal government documents. They want to know what the federal government knew about the harmful effects of climate change, and when they knew about it. They’re arguing that the government has continually failed to recognize the risks of climate change and adequately address the carbon emissions that cause it—and that that failure is a violation of their constitutional right to equal protection under the law, among other things.

The lawsuit has been hailed by climate activists as a potential saving grace—something that could literally force the government to implement aggressive greenhouse gas reduction policies. So far, the lawsuit has survived a number of small challenges, leaving green groups with tentative hope that they don’t actually need to convince Trump to act on climate change. If this succeeds, they can just force him to do it. But Trump’s team clearly recognizes this as well. And if this week’s court actions are any indication, they are not going down without a fight.