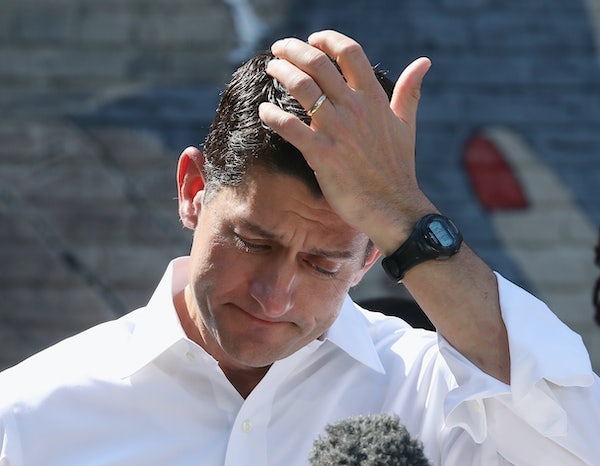 The fallout from Trumpcare is about to get ugly.

Nothing has gone right for Trumpcare in its short life. It’s been less than a week since Paul Ryan walked down from the Capitol with stone tablets in tow, and in that time the American Health Care Act has managed to alienate pretty much everyone, left and right, for being simultaneously too Obamacare-y (too many credits and subsidies) and too draconian (it basically takes insurance away from those who need health care most, the poor and the elderly). But for much of Trumpcare’s first turbulent days, there was an uneasy truce between House GOP leadership and the White House.

But after the CBO report revealed that the AHCA would result in a staggering 24 million people losing their health insurance over 10 years, there are signs that the detente between Ryan and the White House is coming to an end.

Part of the issue seems to be constitutional. Ryan and Trump (and Trump’s closest aides) are simply wired differently. Ryan is playing the happy warrior, trying his damnedest to spin a potentially bill-killing CBO report as if it were a good thing.

This is brazenly dishonest, but in a way that differs from Trump’s dishonesty. Rather than simply lying (or attacking the credibility of the CBO itself), Ryan is spotlighting the parts of the CBO report that he thinks support his narrative. The problem, however, is what Ryan leaves out. Premiums might go down overall, but not for older Americans, whose health care costs would skyrocket under Ryan’s plan. The deficit would go down, but because of drastic changes to Medicaid, which could create a public health disaster. And the tax cuts are almost entirely for the rich.

The Trump White House, however, has a different tactic, which is to claim that the whole CBO report is fake news.

This is the Trump White House’s larger narrative in a nutshell: The bean counters and bureaucrats in Washington are out to get them and will stop at nothing to prevent the good news from reaching the people. (Never mind that the White House’s own report about the bill’s effects is much bleaker than the CBO’s, or that the CBO director was selected by House Republicans, including then-Congressmen Mulvaney and Tom Price, now Trump’s head of Health and Human Services.)

But the biggest reason why the Ryan-Trump alliance is fracturing is that Trump’s allies dislike and distrust Ryan immensely. For them, this is an opportunity to shiv the speaker. Late Monday night, Breitbart posted audio of an October call in which Ryan says, “I’m not going to defend Donald Trump—now now, not in the future.” Posting audio from a very, very different time (this was after the Access Hollywood tape) makes the message plain: Ryan is Judas and he is not to be trusted.