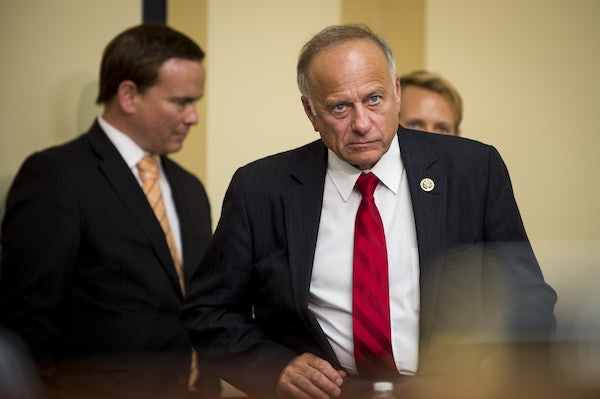 Steve King says racist things because he knows the GOP won’t call him out on it.

One day after saying Western civilization can’t be saved “by other people’s babies,” the representative from Iowa accused Univision’s Jorge Ramos of trying to start a race war. According to CNN, King made the remarks to Iowa radio host Jan Mikelson:

Jorge Ramos’s stock in trade is identifying and trying to drive wedges between race. Race and ethnicity, I should say to be more correct. When you start accentuating the differences, then you start ending up with people that are at each other’s throats. And he’s adding up Hispanics and blacks into what he predicts will be in greater number than whites in America. I will predict that Hispanics and the blacks will be fighting each other before that happens.

Ramos incited King’s ire by pointing out that American minorities will soon outnumber whites in an interview with Fox News’s Tucker Carlson. This is a factual point and a useful test for discovering racists, since the growth of non-white ethnic groups has long fueled white supremacist rhetoric about impending white genocide.

And there’s evidence King buys into this notion: On the same broadcast, he recommended Jean Raspail’s The Camp of the Saints, which depicts a white genocide committed by rapacious Indian immigrants. (It is allegedly one of Steve Bannon’s favorite novels.) “The publishers are presenting The Camp of the Saints as a major event, and it probably is, in much the same sense that Mein Kampf was a major event,” Kirkus wrote at the time of its English translation. It’s an explicitly racist novel, saturated in deep fear at the prospect of white demographic decline. Its evident popularity with Bannon and King is further evidence that they do not blunder into racist rhetoric; it’s one note in a deliberate dogwhistle.

But it’s a tune the Republican Party insists it can’t hear. After King’s remarks on Sunday, Paul Ryan whimpered to press that he hoped King “misspoke,” and that “it wasn’t really meant the way that that sounds.” King promptly cucked him, telling Tucker Carlson he stood by the tweet. “A nation-state needs to have a sense of a common history and common culture,” he said.

Steve King says racist things because he’s a racist, and because he knows he’s unlikely to face repercussions under a Republican Party that is now openly tolerant of racism. This isn’t a deviation for the GOP. It’s in the party’s DNA.