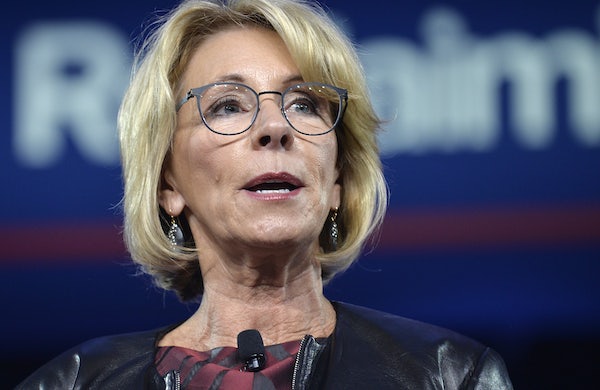 Is Betsy DeVos cutting parents and teachers out of education policy?

Washington Post education blogger Valerie Strauss reported on Tuesday that the federal Every Student Succeeds Act (ESSA) requires that states “consult with outside stakeholders, including teachers, principals, parents, administrators and others” when creating plans that hold schools “accountable” for student progress. But as of this week, DeVos seems to be sending states a different message:

On Monday, the Education Department issued different language in a new “template” that states can use to create their ESSA accountability plans. It has far fewer requirements than the Obama administration’s template by design; DeVos has said power should be with the states to decide how to run their schools. The new template says states must consult only with one party: the governor.

The Education Department told Strauss this new language “simply amplified what’s in the statute,” but Democratic lawmakers, teachers unions, and the National Governors Association certainly don’t see it that way.

“We are disappointed that Secretary DeVos is casting aside input from teachers, parents and stakeholders and is refusing to implement the Every Student Succeeds Act as Congress intended,” Senator Patty Murray and Representative Bobby Scott said in a joint statement. “Betsy DeVos’ action betrays the very intention of this law,” American Federation of Teachers president Randi Weingarten added. The NGA pledged not to waiver in its own stakeholder engagement.

Perhaps this is just the latest in DeVos’s ongoing series of gaffes. Maybe she’ll issue a revised “template” calling for states to consult with families and educators. Either way, she’s got some explaining to do.