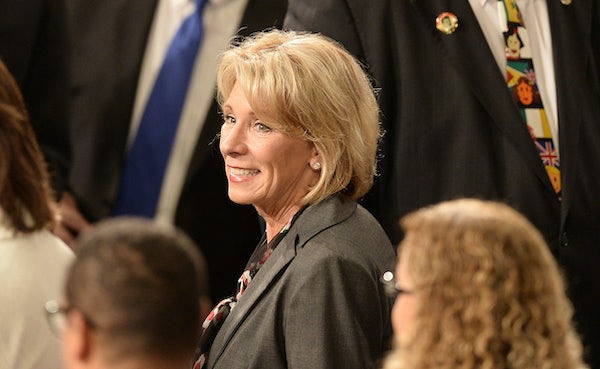 The education secretary started the week by calling historically black colleges and universities “pioneers when it comes to school choice,” appearing ignorant that these schools started because black Americans typically had no educational choices under segregation. Her comment was criticized for its ahistoricism and racial insensitivity, but journalist Soledad O’Brien pointed out it was part of a broader statement that included some pretty poor writing. Then, on Thursday, in an opinion piece for USA Today, DeVos referred to former President Barack Obama’s School Improvement Grants as “Student Improvement Grants.”

It’s a minor mistake, perhaps—one that would probably go unnoticed if its author weren’t famously lacking in basic knowledge about education. DeVos flubbed the difference between academic proficiency and growth—and seemed unaware of federal disability law—during her confirmation hearing. Then she insulted teachers at a Washington, D.C., public school by saying they were operating in “receive mode.”

A good editor can’t save DeVos from verbal gaffes. But knowing that journalists will scrutinize her prepared statements, she ought to find someone in her press shop who can polish and fact-check her prose.