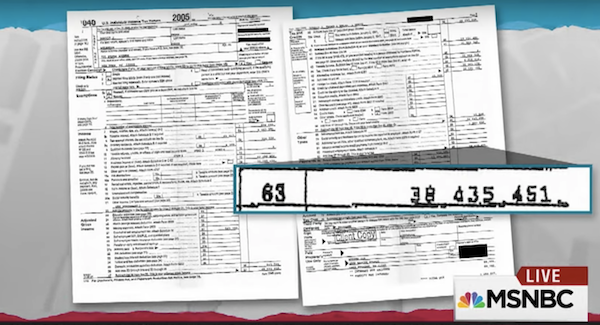 No, Donald Trump isn’t the source of his own leaked tax return.

Rachel Maddow and David Cay Johnston promised more than they could deliver, waving around a two-page 1040 form from 2005 notably lacking in bombshells. But Johnston tried to make more of it with a wild claim: Trump himself could have been the leaker! Trump, after all, has a long history of leaking to the press. The returns, after all, were labeled “client copy” suggesting that they came from someone close to Trump, not someone within the IRS.

Given that corkboards and red string are selling out across the country, perhaps it’s no surprise that many agreed. Donald Trump, the Wizard of Orange, was behind the whole spectacle.

This is actually a common motif. In this instance, the release of tax returns must benefit Trump by distracting the public from all of the other bad stuff he is doing. But this theory is constructed backward. It is entirely dependent on Maddow extravagantly teasing something she didn’t quite have and Johnston running his mouth about where the returns could have come from. They were given an assist from Trump himself on Wednesday morning, whose tweet about the returns seemed half-hearted.

Yes, the tax returns are a distraction from the disastrous health care bill, but they also are another building block in the Russia story, which Trump and his team hate, and the story of Trump’s personal finances, which Trump hates because it shows him to be a corrupt and not very good businessman. Unlike Maddow, The New York Times framed the returns the right way, by showing that Trump wrote off $100 million in 2005. Johnston and the Times both recognized that the returns should make Trump’s quest to abolish the alternative minimum tax significantly harder, if not impossible—without it, Trump would have paid less than 4 percent of his income in tax.

These results also demolish Trump’s argument for not releasing his tax returns: If there’s nothing to hide—if all of the returns look like the 2005 return—then why not release more of them?

The main problem here is that we’ve built up a teleological story of Donald Trump the Political Genius—we start at the end result (Trump is president) and construct a narrative of a canny political operator to get to that point. But the evidence suggests that Trump is a jumble of contradictory impulses, not someone who thinks strategically. The leaked tax return may benefit him in the short term, but it is very possible it won’t in the long term.

Trump is not playing 3D chess. He’s not even playing checkers.