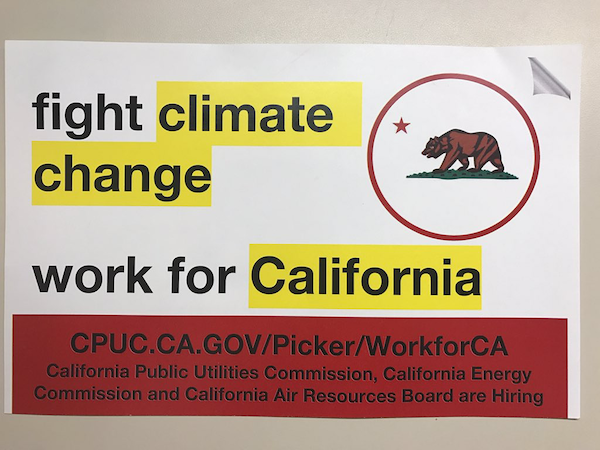 California officials are lurking at EPA headquarters, trying to poach its depressed employees.

Amid news that President Donald Trump’s proposed budget would cut the Environmental Protection Agency by 31 percent and eliminate 3,200 agency employees—or 19 percent of the current workforce—California wants the agency’s employees to know they’re welcome in the Golden State.

A current EPA employee who requested anonymity told me that officials with the California Public Utilities Commission this morning were standing atop a staircase at EPA headquarters in Washington, D.C., handing out flyers that read, “Fight climate change. Work for California.” At the bottom, the flyer says that the PUC, Air Resources Board, and Energy Commissions are hiring, and directs interested parties to a website with the job listings. A tweet from the state’s official PUC account today appears to confirm their presence.

Their timing is right. EPA employees were despondent even before Trump released his budget. At a rally on Wednesday to oppose Trump’s plans for EPA, Nate James, the local president of American Federation of Government Employees, told me he’s spoken to countless distressed employees. “They’re concerned about the future of their ability to carry out their jobs,” he said. “And I have no answers for them.” Judith Enck, the former Region 2 EPA administrator under President Barack Obama, told me she has several friends at the agency who have reached out to her in search of a new job. “They’re so demoralized,” she said. “A whole bunch want to leave, but they can’t find jobs to pay a living wage.”

While Trump pledges to take a sledgehammer to the EPA and dismantle federal climate change programs, California has been doubling down on its aggressive climate and environmental agenda. The state’s governor, Jerry Brown, has pledged war with Trump if he cuts climate research funding. “If Trump turns off the satellites,” he said in December, “California will launch its own damn satellite!” If EPA employees are looking for jobs that help protect human health and the environment, California would certainly be the best place to look.