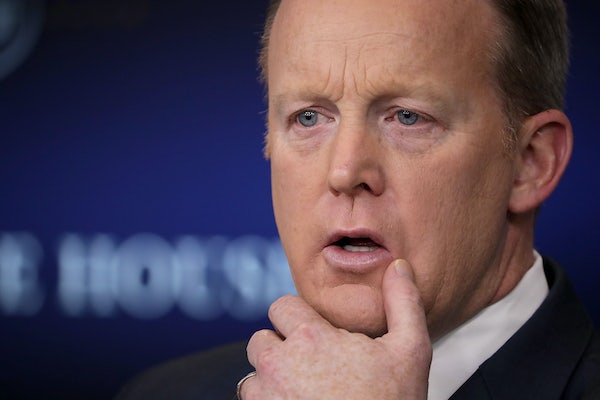 How long until Sean Spicer starts crying at a press briefing?

Every briefing held by press secretary/midsize object Sean Spicer is special, but today’s briefing, in which Spicer shouted at CNN’s Jim Acosta and read news clips for seven (seven!) minutes to defend Donald Trump’s absurd claim that Barack Obama tapped his phone, was something special.

Spicer was asked about the fact that that Paul Ryan and the Senate Intelligence Committee both said on Thursday that they had seen zero evidence to support Trump’s claim. Spicer responded by reading out of context and disconnected news reports that mentioned the attention paid to Trump’s campaign by intelligence agencies. Many of these reports were actually about the close, unprecedented, and troubling level of contact between Trump’s campaign and Russian officials.

In other words, to defend Trump’s claim that Obama tapped his phones and to rebut the growing bipartisan consensus that Trump’s allegation was garbage, Spicer scored a massive own goal. This is part of the White House’s larger attempt to move the goalposts—to claim that Trump was not referring to wire tapping (despite tweeting the words “wire tapping” and “tapping” again and again), but instead was referring to communications that had been swept up by the NSA. That is obviously not what Trump was talking about at the time.

Acosta was one of the many reporters who picked up on the disconnect, leading to this memorable exchange.

Before Trump’s term is up (or he’s impeached or Spicer is fired—whatever comes first), Sean Spicer is going to lose it on air.