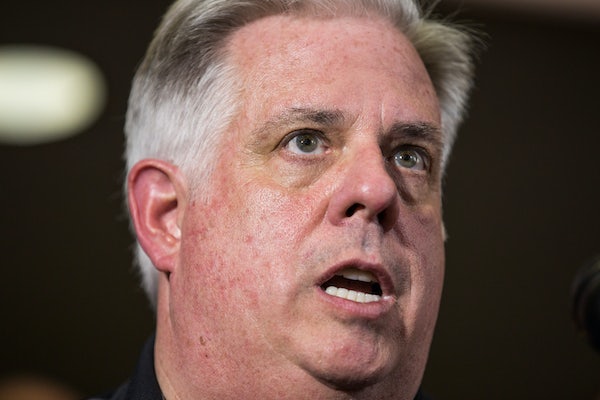 This might be the strongest anti-fracking statement a Republican governor has ever made.

Democratic lawmakers in Maryland have long been pushing legislation that would issue a statewide ban on hydraulic fracturing, a controversial practice which entails injecting water, sand, and chemicals underground to crack shale rock and release oil and gas. In a surprise move on Friday afternoon, Maryland’s GOP Governor Larry Hogan announced his “full support” for that legislation, saying that after looking at the science, he concluded that “the possible environmental risks of fracking simply outweigh any potential benefits.”

This legislation, I believe, is an important initiative to safeguard our environment, and I urge members of the Legislature on both sides of the aisle in both houses to come together and finally put this issue to rest once and for all. Protecting our clean water supply and our natural resources is pretty important to Marylanders, and we simply cannot allow the door to be opened to fracking in our state.

Hogan’s move came as a surprise to fracking opponents, about a dozen of whom were arrested yesterday while protesting fracking outside the state Capitol. A two-year temporary ban on fracking in Maryland is going to expire later this year, and until Friday, supporters and opponents weren’t sure where Hogan stood. Hogan allowed that temporary ban to become law in 2015, but only because he refused to either sign or veto it.

Now, Hogan is joining a small club of what was, until today, exclusively Democratic governors who don’t support the practice. In 2014, New York Governor Andrew Cuomo banned fracking in the state, after state researchers concluded a five-year study on the potential environmental, economic, and public health risks. That study didn’t definitively prove adverse health effects, but it also didn’t disprove them—which was enough to give the state health commissioner “reason to pause.”

Evidently, Hogan also has reason to pause. On Friday, he said even strict environmental regulations on the practice wouldn’t be enough. “The choice to me is clear,” he said. “Either you support a ban on fracking, or you are for fracking.”