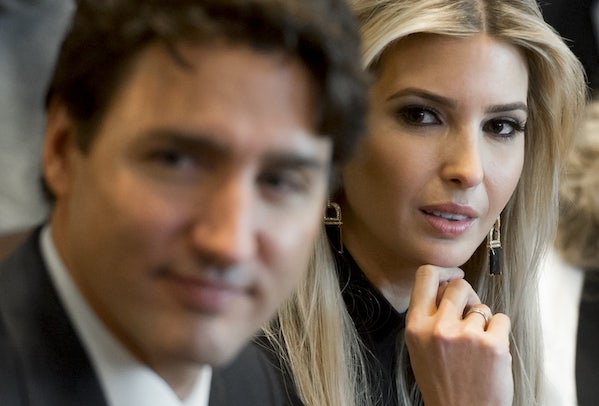 Last night it was reported that Donald’s most beloved child, who has no formal role in the administration, will start working out of an office in the West Wing. Ivanka will also receive security clearance and a government communications device, making her a staffer in all but name.

Ivanka has already been under fire for the potential conflicts of interest generated by her tagging along with her father to meetings with world leaders, including Canada’s Justin Trudeau, Germany’s Angela Merkel, and Japan’s Shinzo Abe. Merkel seemingly couldn’t understand why Ivanka was allowed in their meeting:

Now, as Ivanka sets up shop next to her dad, any semblance of a wall has been torn down. Ivanka is attempting to separate herself from potential conflicts, but only half-heartedly. She put her jewelry and fashion line into a trust. For the handling of the day-to-day operations of that trust, she went not to her husband Jared Kushner, but to Josh Kushner, her brother-in-law-in-hiding, and his wife. And while Ivanka said she would “voluntarily follow all of the ethics rules placed on government employees,” the language she is using here is pretty muddy. As Norm Eisen, former Obama ethics czar, told Politico, “if she can voluntarily subject herself to the rules, she can voluntarily un-subject herself to the rules.”

The problem is that while Ivanka can minimize her conflicts, she can’t eliminate them (she still owns her brand). Her own lawyer told Politico, “we don’t believe it eliminates conflicts in every way.” When it comes to the White House, Ivanka might just be a woman who works too much.