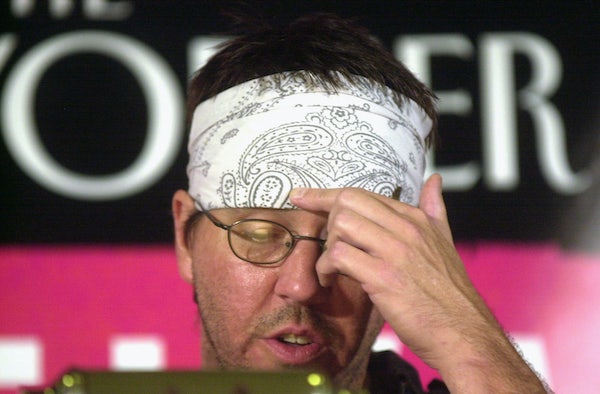 On Tuesday, midway through the second day of his confirmation hearings, Gorsuch did what Jason Segal, the smirky guy from The Office, and millions of bros couldn’t—he destroyed David Foster Wallace’s credibility. “We’re now like David Foster Wallace’s fish,” Gorsuch said. “We’re surrounded by the rule of law, it’s in the fabric of our lives.” Gorsuch was citing what now may be Wallace’s most famous work, his 2005 commencement address at Kenyon College, which has since become a kind of highbrow self-help text:

Wallace is the lingua franca of a certain subset of overeducated, usually wealthy, extremely self-serious (mostly) men. Wallace’s bandana and occasional playfulness disguised this, but history has slowly revealed what has always been true, which is that David Foster Wallace was exactly the kind of person who would be into David Foster Wallace, just smarter.

Gorsuch and the sneakily conservative Wallace are peas in a pod. Wallace has quietly become a favorite of many archconservatives over the last decade: Scalia, the David Foster Wallace of Supreme Court justices, was also a fan, as is National Review’s Kevin Williamson, a man who mistakes facial hair for intellectual depth.

Of course, judging Wallace by the people who read him—even judging him by his own, often extremely regressive political views—is very unfair! Wallace wrote a long love letter to the IRS, after all, and can’t be neatly summed up, which is both his greatest strength and his greatest weakness (it’s what leads him to be taken up by both Gorsuch and the satchel bros). Also, Girl With Curious Hair still bangs.

But this is the company David Foster Wallace fandom keeps now:

David Foster Wallace is essentially the same as skiing and cigars now.