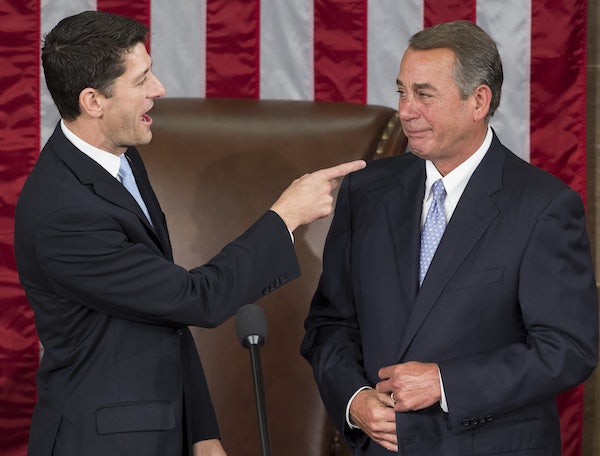 Can Paul Ryan do any better than John Boehner?

Nancy Pelosi can whip votes, and they called Tom DeLay “The Hammer” for a reason. John Boehner, however, who had a more laid-back legislative approach and a more insane caucus, could never enforce that level of discipline as speaker of the House, which helped contribute to the government shutdown of 2013, among other sins.

Paul Ryan, the current speaker of the House, is very different from Boehner. Whatever you think of the merits of his wonkish reputation, he is certainly more policy-oriented than his predecessor. Ryan has been speaker since the fall of 2015, but he hasn’t really been tested in that role yet. What we’ve seen from Ryan suggests a McConnell-ish willingness to be hands off without McConnell’s ability to cultivate loyalty and get things done. There has been nothing in these last 18 months to suggest that Ryan has any more control over the raucous Freedom Caucus than Boehner did, despite the fact that Ryan insisted that the hard-right group be nice to him before he assumed the position.

This week is Ryan’s first big test as speaker. He and Trump have laid out an ambitious plan to repeal Obamacare, essentially daring Republicans to vote against them. The problem with their strategy, however, is that it’s clear that they have much more to lose than any of Ryan’s members. With two days to go until the rushed vote, Ryan has his work cut out for him: 26 Republicans currently do not support the AHCA and the GOP can only afford to lose 21 for the bill to pass. Some members—like the aptly named archconservative Dave Brat, who unseated the weaselly archconservative Eric Cantor in 2014—are calling on him to delay the vote.

Ryan created this mess by deciding to ram health care through and by convincing Donald Trump that it had to go first. In the next two days, we’ll find out if that was a good bet. We’ll also finally have a pretty solid idea of what kind of speaker Paul Ryan is. And with 48 hours to go, Ryan looks more like Boehner than DeLay or Pelosi.