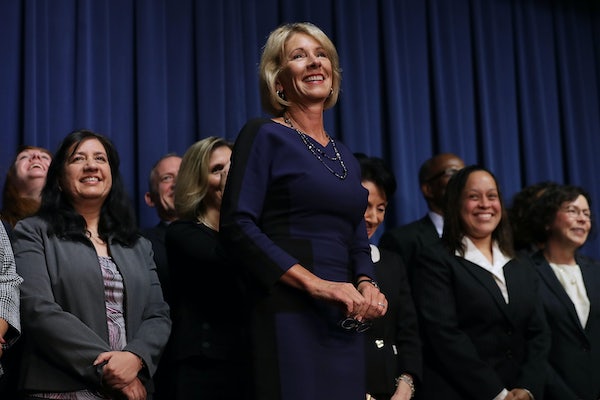 DeVos-style school privatization is surging in the states.

“Lawmakers in at least 10 states are pushing bills that would expand or create new tax credit scholarship programs, education savings accounts and voucher policies,” Politico’s Benjamin Wermund reported on Wednesday. All of these efforts would undermine America’s public schools, either with direct taxpayer funding for private school students or tax incentives supporting private school scholarship programs. And though the bills are advancing independent of Education Secretary Betsy DeVos, she’s already cheering them on—and pledging to bolster their efforts.

“It perhaps could be said that the selection of Secretary DeVos is, in part, the result of an increased energy and momentum in the school choice movement that has been building in states over the past six or seven years,” Josh Cunningham, an education policy specialist at the National Conference of State Legislatures, told Politico.

A growing body of research confirms that private school vouchers actually don’t increase academic achievement and end up failing the low-income students they’re intended to help. But vouchers remain a signature policy priority for DeVos, and Democrats are gearing up to fight back. Washington Senator Patty Murray, the ranking member on the Senate Health, Education, Labor and Pensions Committee, plans to tear into DeVos’s privatization agenda in a speech at the Center for American Progress this afternoon.