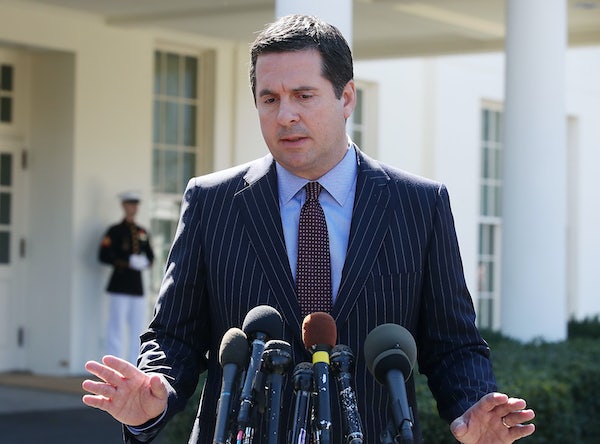 Two days ago, Nunes grilled FBI Director James Comey and NSA Director Mike Rogers during a House hearing ostensibly convened to investigate Russian meddling in the U.S. election—as it turned out, Nunes was more concerned about the source of leaks showing contact between Trump’s team and Russian officials, not the nature of the contact itself. Now, Nunes is engaged in a very strange bit of political theater. On Wednesday, he was told by a “source”—an anonymous source—that Trumpland’s communications after the election were “incidentally” collected by U.S. national security agencies.

Nunes insisted that the surveillance, weirdly enough, was not related to Russia. Nunes then informed Paul Ryan of this development. Then, without briefing his colleagues on the House Intelligence Committee, he went to the White House to tell Donald Trump and do a press conference. Trump said that the information, which had nothing to do with his accusation that Barack Obama wiretapped Trump Tower, “somewhat” vindicated his claim that Barack Obama had wiretapped Trump Tower. “I very much appreciate the fact that they found what they found,” he said.

Nunes, meanwhile, also hinted that something nefarious was going—perhaps also orchestrated by Barack Obama. “Some of it seems to be inappropriate. ... I don’t know if the American people would be comfortable with what I’ve read,” he said.

So what the hell is going on here? The simplest explanation is that Nunes received a speck of evidence that could be packaged in such a way that, if you squint real hard, vindicates Trump’s paranoid tweets about being wiretapped by the Obama administration. He then rushed that information to Trump so he could use it as political cover. Nunes, despite admitting that the Trump transition team was not the “target” of surveillance and that Trump Tower was not wiretapped, could only have kickstarted his strange and bewildering string of events for that purpose.

It’s worth noting three things here. One, it’s possible that Nunes’s own communications were swept up, since he was a member of Trump’s transition team. Two, being caught up in surveillance by the U.S. government should be a cause for suspicion, at least to the head of the House Intelligence Committee. Third, Nunes is supposed to be investigating the Trump campaign’s relationship with the Russian government. He is justifying his behavior by claiming that the information is not related to Russia. But still, this doesn’t change the fact that a man that has been tasked with investigating the president embarked on a bizarre stunt seemingly for the sole purpose of insulating the president from criticism.