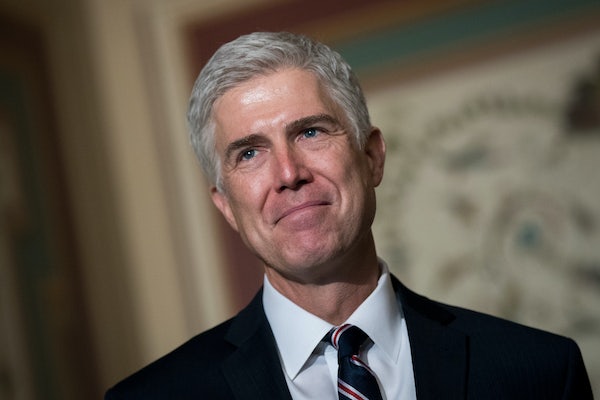 Democrats will use the filibuster to try to block Neil Gorsuch after all.

On Wednesday evening, Senate Democrats were sending up trial balloons: What if they cut a deal with Senate Republicans in which Gorsuch gets through and they preserve their filibuster power for Donald Trump’s next Supreme Court nominee? Per Politico:

The deal Democrats would be most likely to pursue, the sources said, would be to allow confirmation of Gorsuch in exchange for a commitment from Republicans not to kill the filibuster for a subsequent vacancy during President Donald Trump’s term. The next high court opening could alter the balance of the court, and some Democrats privately argue that fight will be far more consequential than the current one.

This is the kind of deal we’ve come to expect from Democrats. It thinks several steps ahead but loses in the near-term; then, when the moment of truth arrives, Republicans will obviously act in bad faith and kill the filibuster. Democrats get screwed twice over.

The left wing of the Democratic Party was understandably pissed when this story broke. But on Thursday morning, Minority Leader Chuck Schumer endorsed filibustering Gorsuch’s nomination, suggesting that the Democratic leadership is sensitive to the party’s progressive base. Maybe they also realized that Mitch McConnell is never going to let a filibuster get in the way of a Republican nominee, so they might as well blow it up now.

Gorsuch “was unable to sufficiently convince me that he’d be an independent check,” Schumer said. He is “not a neutral legal mind but someone with a deep-seated conservative ideology,” he continued. “He was groomed by the Federalist Society and has shown not one inch of difference between his views and theirs.” Whether or not Schumer will tie Gorsuch’s nomination to the ongoing FBI investigation of President Trump—something he has hinted that he will do—remains to be seen.