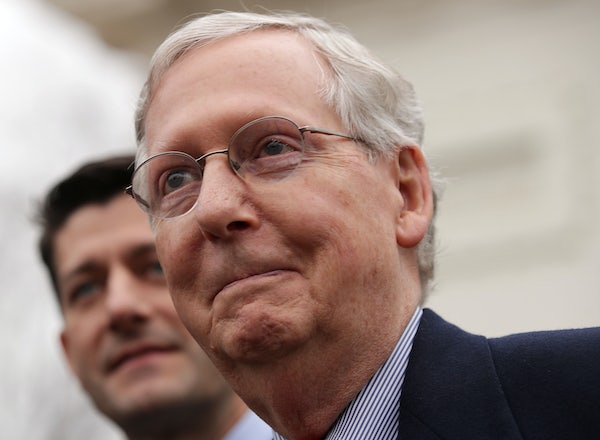 Here’s the scenario in which Trumpcare doesn’t crash and burn.

Opponents of the American Health Care Act had cause for optimism Friday morning. After days of wrangling, House Republicans still appeared short of the votes they’d need to pass President Donald Trump’s slapdash replacement of the Affordable Care Act. Rodney Frelinghuysen, chairman of the Appopriations Committee, came out as a significant No vote.

Trump looked ready to accept defeat, gearing up to blame Speaker Paul Ryan for what would be a crippling debacle. Meanwhile, Steve Bannon, the president’s chief strategist, was privately grousing that the bill “doesn’t drive down costs” and was “written by the insurance industry,” according to New York magazine. (Breitbart swiftly bannered Bannon’s comments in a splashy homepage headline.)

But as defeat becomes a more palpable reality, circumstances may change. All Republicans need to do is pass a bill in the House—any bill—to get over the toughest hurdle. After that, Senate Majority Leader Mitch McConnell may totally rewrite it to make it more politically palatable for the Senate. MoveOn’s Ben Wikler has been tweeting as much:

Wikler’s assumption is that the House Freedom Caucus caves both later today and when the Senate sends back its McConnell-written bill. This is, needless to say, a large assumption. The question is whether these Republicans (and others) see their fate tied to Trump, in which case they will pass the bill, or feel that they are better off on their own—in which case it dies.