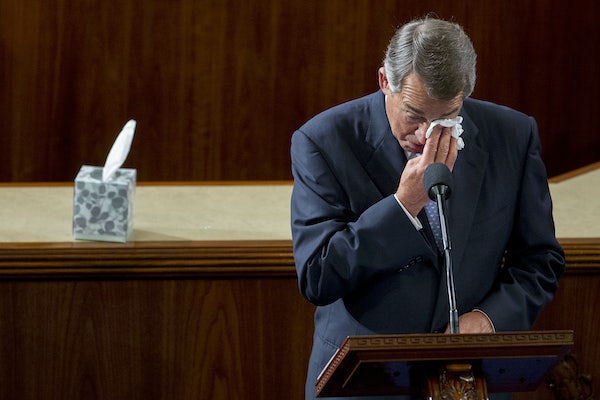 Who cares what John Boehner is doing right now?

As Trumpcare swirls down the toilet bowl of history, it has become fashionable to suggest, wryly, that Paul Ryan’s Obamacare troubles vindicate former House Speaker John Boehner, who faced widespread criticism for his own legislative failures.

Boehner wasn’t any more to blame for Republican problems than anyone else who might lead the party, the thinking goes, and must revel in watching someone else deal with them.

Allow me to politely dissent from this conventional wisdom.

Boehner is an affable guy, and less ideologically stringent than Ryan, which lends him afterglow in this particularly cruel and chaotic moment. George W. Bush benefits from this kind of revisionism, too. But neither man deserves it.

Boehner blew just about every call of his speakership, whether he was trying to lever President Obama into signing conservative bills, or limit losses when Democrats were operating from strength. His biggest accomplishments were budget sequestration, which everyone hates, and a modest agreement he struck at the end of his career with Nancy Pelosi to fix Medicare’s physician reimbursement formula. Not only did he leave no legacy, but he left the political system in far shabbier shape than he found it.

It isn’t a huge leap to think there would be no President Trump had Boehner simply put the Senate’s comprehensive immigration reform bill on the House floor for a vote in 2013. He was widely applauded inside the beltway for mocking his own members, behind closed doors as a bunch of cowards, too scared to pass the bill they promised to pass…

…only to chickenshit out of forcing the issue himself.

The GOP’s current health care fiasco has its roots in Boehner’s unwillingness to insist that conservatives square their ambitions with reality. After Obama won re-election in 2012, Boehner sat down for a primetime interview and said, “Obamacare is the law of the land.” That was true! But within hours he’d allowed himself to be bullied into spending the rest of his speakership pretending repeal was still a viable option, essentially committing Republicans to a position that he knew would grow increasingly toxic as the ACA got implemented and more and more people began to enroll.

Boehner’s a great guy to have a drink with, and I’m sure he mows a mean lawn, but he’s entitled to no more absolution than any other powerful official who loses sight of the public interest.