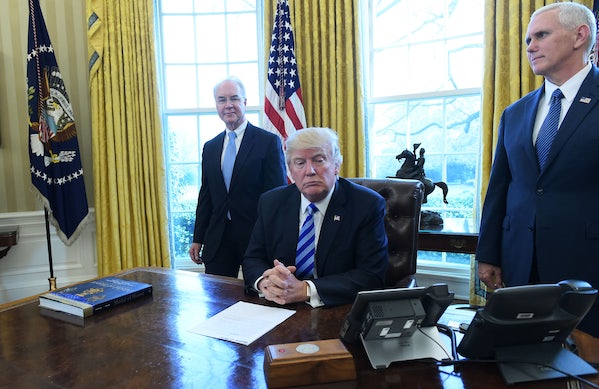 Donald Trump is hilariously trying to blame the Democrats for how badly he and Paul Ryan bungled Trumpcare.

Trumpcare went down in flames on Friday and Trump had only himself (and, to a very slightly lesser degree, Paul Ryan) to blame. Trump did a terrible job selling the public and whipping congressmen, showing that he had no understanding of how health care or Congress works. He completely screwed up negotiations with a number of parties by repeatedly and transparently bluffing. It was, moreover, never clear, at least to the public, why Trump and Ryan were pushing health care so fast and why there were doing so now, before tax reform or Trump’s proposed $1 trillion infrastructure package. Nothing about the American Health Care act made sense—not the content of the bill, not the timing, and not the series of dramatic escalations Trump made over over the past three weeks.

Its failure on Friday, though still shocking, was inevitable from the outset: This was a terrible bill being sold to a Republican Congress that has no idea what it means to be in the majority, by a president who has no idea how to govern. Which, of course, means that Donald Trump blamed the Democrats for the bill’s failure during a very strange press conference in which he was flanked by Tom Price and Mike Pence for some reason:

“We had no Democrat support. They weren’t going to give us a single vote so it’s a very difficult thing to do,” Trump said. “I’ve been saying for the last year and a half that the best thing we can do politically speaking is to let Obamacare explode—it’s exploding right now. ... What would be really good is—when it explodes—if the Democrats got together with us and did a real health care bill. I’d be totally open to it. I think the losers are Nancy Pelosi and Chuck Schumer. Because now they own it—they own Obamacare. 100 percent. They own health care. This is not a Republican health care. This is not anything but a Democrat health care.”

This is a very odd analysis of the situation. While it’s true that they had no Democratic support, Trump did not reach out to Democrats. More importantly, he and Ryan didn’t need to. The Republicans control the House: They should have been able to pass this bill with zero Democratic support. If they wanted to pass a bipartisan bill, as President Obama wanted to do with the Affordable Care Act in 2010, they could have reached out to negotiate. They didn’t.

That basic fact—that the Republicans are in control of the legislative branch as well as the executive branch—means that the rest of Trump’s statement is just as nutty. Because the Republican Party controls the government, they effectively own health care. They are the ones with the means to fix this system. That Trump is now actively rooting for Obamacare to fail only puts the burden of responsibility even more squarely on his shoulders.