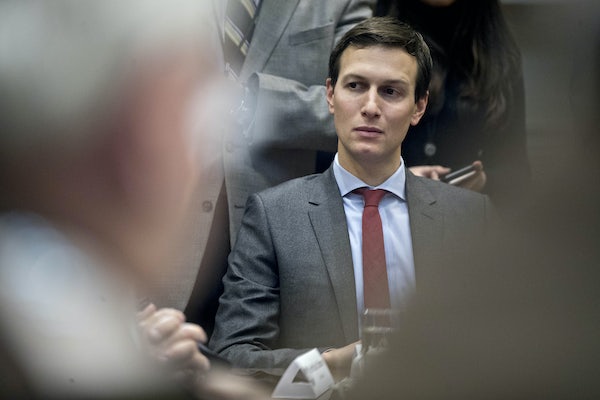 Jared Kushner’s “SWAT Team” to run government like a business reveals what he doesn’t know about government (and business).

The Count of Monte Cristo cosplayer was skiing when Trumpcare died—a good place to be, I suppose, given the fact that the Trump White House and Republican House of Representatives spent the weekend throwing blame around. But that doesn’t mean that Kushner is disengaging. Far from it. Only Kushner’s wife, Ivanka Trump, and maybe Steve Bannon can compete with Kushner’s influence in the presidential orbit.

Despite having no history of public service and a business record that’s entirely dependent on inherited wealth and inherited proximity to power, Kushner’s fingerprints are all over the White House’s domestic and foreign policy (Kushner is Trump’s point man for China, Mexico, Canada, and the Middle East). And he’ll add another helmet: Late Sunday The Washington Post reported that Kushner would lead The White House Office of American Innovation which is (emphasis added) “viewed internally as a SWAT team of strategic consultants.”

Uh huh. If you’re able to set aside the terrible and disturbing SWAT team metaphor, which you shouldn’t because it’s terrible, this is not a terrible idea in and of itself. The Obama administration started two startup-ish programs to bring digital innovation to the White House that have both made government programs more efficient without being disruptive—the US Digital Services and 18F. Neither of these programs, strangely, are mentioned in the Post’s report or by the White House, perhaps because it’s not entirely clear how Kushner’s SWAT Team will be different.

The Office of American Innovation seems to be an outgrowth of the Strategic Initiatives Group, which Kushner worked on with Bannon, who famously said that his goal is to “destroy the state.” So, while the USDS has worked tirelessly to improve the functioning of the VA and Medicare, it doesn’t necessarily follow that Kushner’s programs try to improve the functionality of government programs—on the right, after all, “efficiency” is often a euphemism for “cutting budgets and staff.” If Kushner really wanted to make the White House work efficiently, he might start by hiring people—key government offices are currently empty.

But the most revealing part of the Post piece about Kushner’s new role is this quote: “We should have excellence in government. The government should be run like a great American company. Our hope is that we can achieve successes and efficiencies for our customers, who are the citizens.” The idea that the government should be run like a company is not a new one—judging by Trump’s performance in his first nine weeks in office, it’s also not a good one. But this quote is revealing in that it has the relationship between government and the citizenry backwards: Citizens are not the government’s “customers,” they’re its bosses.

But Kushner has other things on his mind besides making the government function like Fuddruckers. On Monday morning, The New York Times reported that Kushner is the latest Trump White House official to have obscured meetings with Russians—he apparently met with Russian ambassador Sergey Kislyak twice, although the White House did not disclose those meetings. He’ll soon be taking a break from throwing flash grenades and kicking down doors in the federal government to testify before the Senate.