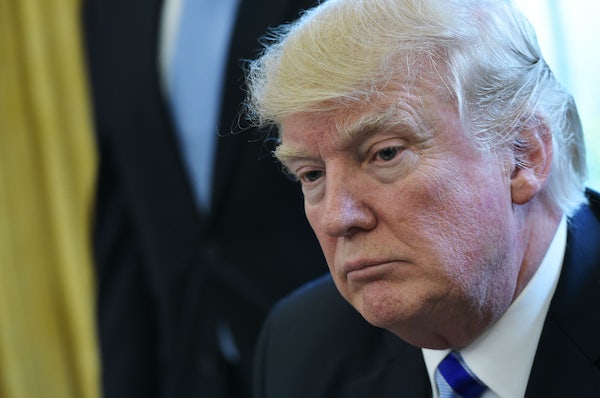 Donald Trump is baiting the Freedom Caucus to shut down the government.

Trump’s last week in office was by far his worst yet—no small achievement, given that his first 65 days in office have been characterized by chaos, infighting, and incompetence. His failure to repeal and replace Obamacare means that he will most likely end his first 100 days in office with zero legislative achievements, despite Republicans controlling both the executive and legislative branches.

Trump’s response to the failure of Trumpcare was characteristically contradictory. On one hand, he signaled that he was ready to move on, that less than three weeks of health care debate was already too much, and that it was time to focus on tax reform. According to Politico, Trump was “less upset about the death of the health bill than he had been about the crowd size controversy at his inauguration.”

On the other hand, the White House spent the weekend playing the blame game (also: golf). And while Trump is clearly blaming everyone not named “Donald John Trump” for his failure, the House Freedom Caucus has emerged as the most public target of his wrath. He tweeted at them before the fateful non-vote:

And then again on Saturday after the bill had failed:

As Axios Presented By Koch Industries’ Jonathan Swan wrote over the weekend, “the conservative House Freedom Caucus—the group Trump blamed on Twitter this morning for killing his Obamacare replacement bill—will almost certainly make defunding the women’s health group and country’s biggest abortion provider a non-negotiable condition for it to support the government funding bill.” Trump’s attacks on the group for failing to defund Planned Parenthood in the Obamacare repeal will only further embolden them.

This is not, to put it mildly, the kind of move you’d predict from a supposed master negotiator, or from someone who has supposedly moved on to the next fight. Forget tax reform—the continuing resolution is most likely the Trump administration’s next big fight. And Trump is botching this one, too.