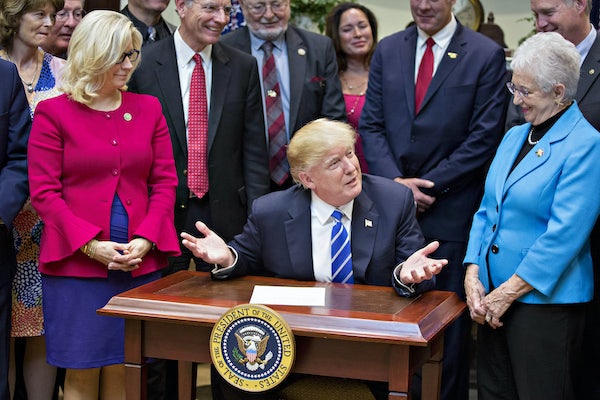 Trump treated the tweeting public to a rare late-night barrage on Monday evening. Unsurprisingly, his recent troubles—the Russia scandal, which has been spinning out of control for weeks now, and the disastrous attempt at repealing and replacing Obamacare—were at the forefront of his mind. Trump’s tweets about Obamacare were predictable: He blamed the Freedom Caucus yet again for killing the bill, and he claimed, as he did a few minutes after pulling the bill, that Obamacare is collapsing (it isn’t). His tweets about Russia were stranger—and they continued the next morning.

So what’s going on here? Trump starts by rehashing the very, very old story of John Podesta, the Clinton Foundation, and the Russian uranium deal—a story that helped kick off the right’s anti-Clinton war back in 2015 and that served as a kind of grace note to Clinton’s eventual defeat in the 2016 election. That story emerged out of the book Clinton Cash, which was written by Peter Schweizer, the head of the Steve Bannon–funded the Government Accountability Institute. In many ways, the uranium story and Clinton Cash set the pattern for the attacks that Bannon and Trump would use against the Clintons: that they were part of a corrupt global elite that was undermining America. When Wikileaks released John Podesta’s emails in the summer of 2016, the organization would once again spotlight the Russian uranium story.

But that is a very old story at this point. Trump is also spotlighting a newer dubious story about the Clinton campaign and Russia. A number of rightwing sources have boosted a Daily Caller story that alleges that Podesta “may have violated federal law by failing to disclose the receipt of 75,000 shares of stock from a Kremlin-financed company when he joined the Obama White House in 2014.” This story relies on—you guessed it—Wikileaks emails and the Government Accountability Institute.

Trump is doing what he’s done for the last several years: He is signal-boosting dubious stories from right-wing outlets to muddy a damaging narrative. But this is not a particularly good time for Trump to be jumping up and down telling people to look at reporting based on Wikileaks investigations. He’s also reminding us that he is the president—not Hillary Clinton, not John Podesta, neither of whom have been accused of receiving help from the Russians in an election that they lost.

All Trump is doing is spotlighting his own, well-documented connections with the Russians. And he’s doing so at a time when there’s a news vacuum, following his health care fiasco. The Russia story already seems poised to rush into that vacuum—and Donald Trump is helping.