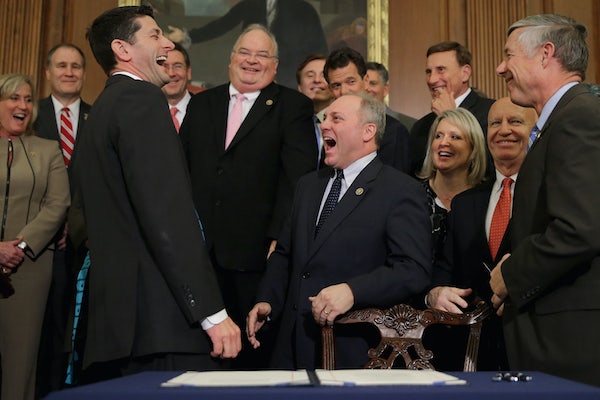 Are Republicans seriously going to try to repeal Obamacare again?

On Friday, Paul Ryan said that Obamacare was “the law of the land.” Donald Trump indicated that he was going to move on to tax reform and that health care would be shelved. But on Tuesday—four days after the American Health Care Act was spared a humiliating, resounding “no” vote in the House at the last minute—there are signs that Obamacare repeal is still on the table.

Members of the Freedom Caucus spent the weekend saying that they weren’t ready to move on. On Tuesday, Congressman Mo Brooks, a member of the Freedom Caucus—the group that Trump blamed for blowing the Obamacare repeal bill—said he was planning on filing a discharge petition to force a vote on full repeal of Obamacare, an extraordinary move from a member of a majority party in Congress.

But Brooks may not need to. Later Tuesday morning, The New York Times reported that the White House is still pushing Obamacare repeal: “House Republican leaders and the White House, under extreme pressure from conservative activists, have restarted negotiations on legislation to repeal the Affordable Care Act, with House leaders declaring that Democrats were celebrating the law’s survival prematurely.” Vice President Pence is leading talks.

It’s too early to tell how seriously to take this report. Congressional Republicans and the White House are indeed under an enormous amount of pressure from conservative groups who believe that they reneged on a promise to repeal Obamacare. (Which they did!) But they were under that pressure when the bill fell apart as well. The activist groups that are pushing for full repeal, as the events of the last month have shown, also appear to be at odds with the rest of the country—there’s no indication whatsoever that a different repeal bill would fare any better in opinion polling.

Republicans face an existential problem when dealing with health care: To please extremists they alienate many so-called moderates; while Trump remains popular with Republicans, his overall unpopularity weakens his ability to hold the congressional coalition together. That calculus means that for a bill to pass either chamber of Congress, let alone both, it would probably require Democratic support, which is simply not going to happen while Donald Trump occupies the White House.

Trump is also signaling that he wants to move on to infrastructure and tax reform—and to do both simultaneously. If true, he clearly doesn’t have the bandwith to do health care as well. And that leads to what is probably the inevitable conclusion here: The GOP is keeping the door open on health care to have something to run on in 2018, or at least to minimize the damage it took from the disastrous attempt to repeal Obamacare.