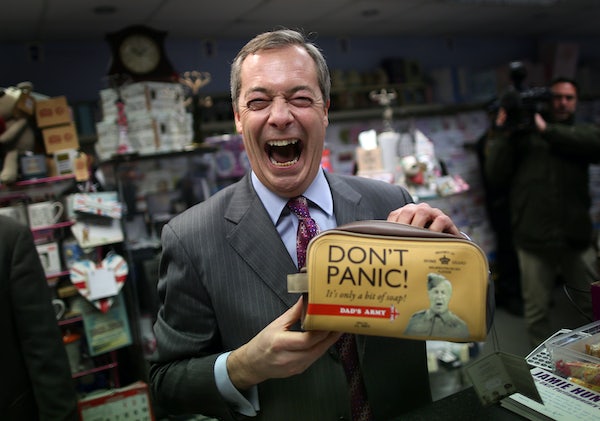 It’s amazing that Britain is going to spend the next two years doing this crap.

Theresa May, keeper of one of the best chains in the rap game, formally began Brexit on Wednesday by triggering Article 50 of the Lisbon Treaty. The divorce proceedings between Great Britain and the EU must now end in two years. “This is an historic moment from which there can be no turning back. Britain is leaving the European Union. We are going to make our own decisions and our own laws,” May said.“We are going to take control of the things that matter most to us. And we are going to take this opportunity to build a stronger, fairer Britain—a country that our children and grandchildren are proud to call home.”

This, of course, conveniently overlooks the fact that young Britons voted overwhelmingly—by a 3-1 margin—to remain in the European Union.

Immediately after the surprise vote to leave the European Union in July, there was some hope that those who wished to remain in the EU would be able to ultimately prevail and stop the divorce. But that never came to pass (to be fair, neither did the recession many predicted).

Nigel Farage, the living embodiment of every imaginable British stereotype (particularly the colonial ones), is happy and that’s never a good thing.

Despite the hopes of May and Farage, leaving the EU will be a costly process, sucking up valuable resources that could be spent in less self-destructive ways. The list of things that must be done is daunting, including fashioning a whole new immigration system and negotiating a new treaty with the EU. It will also be a lengthy one—two years is a long time to continuously punch yourself in the face.

It’s tempting to feel superior in moments like this, but Brexit will theoretically be over on March 29, 2019. We’ll have to wait another 20 months for our version to Brexit to (maybe) end.