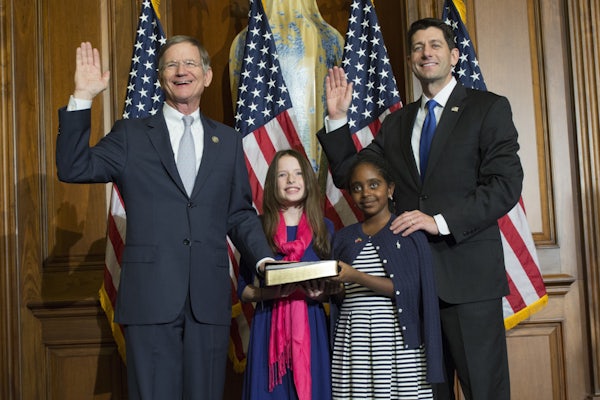 The Trump administration has been nothing if not a master class in gaslighting—the art of manipulating people, often through lies, into questioning their own sanity—and its pupils on Capitol Hill have clearly been taking notes. On Wednesday, the Republicans on the House Science Committee held a three-hour hearing on the merits of climate change science, a cavalcade of falsehoods so relentless and seemingly rational that one might well need psychiatric counseling after having watched it.

There were four witnesses: One scientist from within the scientific mainstream, and three from the climate-denial fringe. This witness makeup, the result of Republicans’ majority power, created an environment where there appeared to be exponentially more doubt about the reality of global warming than actually exists in the scientific community (97 percent of climate scientists say global warming is problematic and caused by humans). The stated intention of the hearing was to bring “integrity” back to the scientific process. “It is important that we have the best available data to make informed decisions,” said Republican Congressman Andy Biggs of Arizona. “It is also important that this data is grounded in sound science that is not biased or part of a larger political agenda.”

That sounds perfectly reasonable, but an “honest discussion” of the data is not what happened. It was not honest, for example, when House Science Committee Chairman Lamar Smith angrily said the Heartland Institute—an organization that openly denies climate science—does not deny climate science. It was not honest when Smith criticized Science magazine—one of the country’s most prestigious science publications—as being a non-objective source of information about science. Nor was it honest that the discussion would be apolitical. Judith Curry, a scientist who doubts mankind’s role in climate change, ended her opening statement thus: “Let’s make scientific debate about climate change great again.”

At one point, a Republican on the committee even tried to pin the label of “climate denier” on Michael Mann, a world-renowned climate scientist the Democrats had called to defend mainstream science. Georgia Congressman Barry Loudermilk asked Mann if he though it was possible, even in the slightest, that humans are not the main driver of climate change. Mann said that based on the current data, it’s not possible. Loudermilk concluded: “We could say you’re a denier of natural change.”

For being the only witness who accepted the mainstream position on climate change, Mann sure took a beating. Representative Paul Higgins pressed Mann to prove he wasn’t “affiliated or associated” with the Union of Concerned Scientists or the Climate Accountability Institute, two left-leaning climate science advocacy groups. Mann, clearly confused, said he knew people in the groups but didn’t work for them. Texas Congressman Randy Weber then attacked Mann for not being able to “remember” if he’s affiliated with the groups. “It certainly seems to be a convenient lack of memory,” Weber said.

For all their gaslighting, these Republicans never did conceal the true intention of the hearing: to bully the scientific mainstream. Smith even suggested as much last week at Heartland’s annual conference for climate change deniers, where he was met with cheers when he announced his three chosen witnesses. When he mentioned Mann, the crowd loudly booed, and Smith smiled. “This hearing is going to be so much fun,” he said.