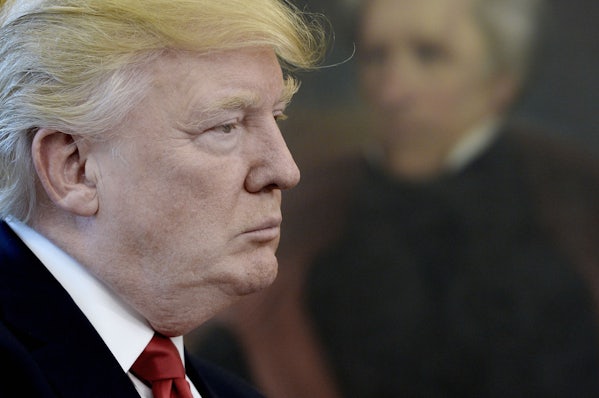 Since Trump was inaugurated in January, millions of people have protested his racist, misogynistic rhetoric and his racist, misogynistic administration. His national security adviser resigned after lying to the vice president about his conversations with the Russian ambassador during the transition. The director of the FBI informed the House Intelligence Committee, which is investigating Trump campaign’s relationship to Russia, that the president was under investigation by the FBI. Trump’s vaunted Obamacare replacement crashed and burned after 19 pathetic days. Trump’s relationship with members of both parties in Congress is in tatters. Nearly every day starts with a new report detailing infighting, dysfunction, and incompetence in the White House. And Donald Trump is still tweeting about the election.

Here are some tweets from Monday morning, the beginning of a week that will be defined by high-profile meetings with the leaders of Egypt and China:

Here are some things that were left out of these tweets: Fox & Friends is a gossipy morning show that doesn’t do reporting, amazing or otherwise, and whose daily lineup is defined by the knowledge that the president loves the show; John Podesta, unlike Donald Trump, is not a member of the government; Hillary Clinton didn’t receive the “answers” to the debate because debates don’t have answers—she received a question; also, the debate was a primary debate held over a year ago; and, if Donald Trump was “electronically surveilled” it was likely because he was caught up in what is called “incidental collection,” because members of his campaign were talking to Russian officials who are surveilled as a matter of course—or were being surveilled themselves because of their own shady dealings.

Three members of his campaign—Paul Manafort, Carter Page, and Michael Flynn—have resigned from positions at least partly because of those conversations. Attorney General Jeff Sessions recused himself from the Department of Justice’s investigation of the Trump campaign after he lied about conversations with the Russian ambassador. Trump son-in-law and Mr. Fix It Jared Kushner will soon testify before the Senate about his conversations with the Russian ambassador. All of this is threatening to bring down his administration. And Donald Trump’s half-assed attempt to muddy the waters is to tweet about the election.