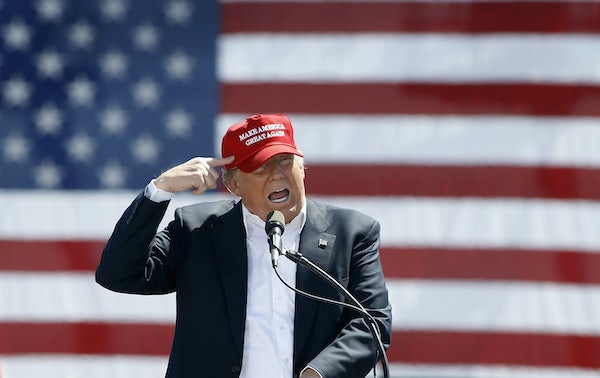 Trump’s eleventh week in office is the closest he’s had yet to a true foreign policy test. Tuesday was marked by news from countries that represent longstanding failures of the international community: The horrific sarin gas attack in Syria, which left at least 69 dead, and yet another missile test in North Korea. The week is also marked by two major meetings—the first, which took place on Monday, was with Egyptian military strongman Abdel Fattah el-Sisi and the second, which takes place on Thursday, is with Chinese leader Xi Jinping. (The North Korean missile test seems to have been timed for this second meeting.)

On the campaign trail, Trump was incoherent on foreign policy, which is either a sign of his complete lack of experience or, more charitably, of him taking Richard Nixon’s “madman theory” to a new level. But over the last few days we have seen a distinct policy take shape. Trump will be even friendlier with dictators, with the exception of Kim Jong-un and the theocratic leaders of Iran, than his predecessors.

Rex Tillerson signaled over the weekend that the U.S. is fine with Bashar al-Assad remaining in power, which may have contributed to Assad’s decision to use sarin gas on his own people. Trump embraced Sisi on Tuesday without condemning human rights abuses in Egypt, marking a shift in the U.S.’s posture. The message was clear: The Trump administration will not bother to pay lip service to human rights.

And after North Korea’s missile test, Tillerson released this curt statement: “North Korea launched yet another intermediate range ballistic missile. The United States has spoken enough about North Korea. We have no further comment.” This is a very strange statement, to put it lightly, leaving way too much room for interpretation. Is this a declaration that diplomacy has gone nowhere? Is the U.S. treating Kim like a toddler who is best ignored? Does Tillerson just hate diplomatic protocol?

The meeting with Xi is shaping up to be a historic one—while the Obama administration also tried to play down human rights in its relations with China, it looks like they will now be tossed out altogether. Instead, trade will be the main subject. Trump’s ideas about trade are very black-and-white, while Xi’s certainly are not. If Trump’s meeting with Angela Merkel and Theresa May are any indication, this will be awkward and passive-aggressive.

There seems to be no broader idea about international security or national interest in Trump’s respective actions toward Kim, Sisi, Assad, and Xi, other than that broad, universal ideas (i.e. human rights) are inconvenient and hypocritical. This is Trump’s transactional foreign policy at work—whether it will give him more leverage or less remains to be seen.