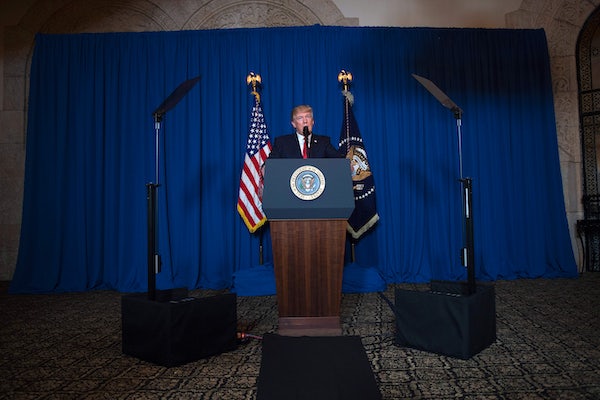 Donald Trump just learned the quickest way to seem “presidential” is to lob a bunch of bombs into another country.

Late Thursday evening, the United States launched 59 Tomahawk missiles into a Syrian airbase that was reportedly responsible for chemical weapons attacks in the country earlier in the week. The airstrike marked the first direct action taken by America in Syria’s horrific six-year civil war—and a major escalation of the United States’s long-simmering conflict with Syrian Bashar al-Assad and his Iranian and Russian backers. “Tonight, I call on all civilized nations to join us in seeking to end the slaughter and bloodshed in Syria, and also to end terrorism of all kinds and all types,” Donald Trump said in a short televised statement. “We ask for God’s wisdom as we face the challenge of our very troubled world. We pray for the lives of the wounded and for the souls of those who have passed.”

The decision to bomb Syria came after a week of confusion and mixed signals from the White House. A week ago, Secretary of State Rex Tillerson suggested that the United States was OK with Assad remaining in power—a move that may have contributed to Assad’s decision to use chemical weapons. And immediately after the chemical weapons attack, the Trump administration blamed the Obama administration for Assad’s action. All of this was largely in line with what Trump had said on the campaign trail, that he thought that intervention in Syria was a mistake.

It was only on Wednesday that the Trump administration began to change its tune on Syria. Trump said the use of chemical weapons “crossed many lines.” A day later, America was bombing Syria.

The response from cable news was monolithic and alarming. NBC’s Brian Williams unironically quoted an ironic Leonard Cohen lyric about the horror of war and described the missiles as “beautiful.” Many people, including CNN’s Fareed Zakaria, said that Donald Trump “became president” on this, his 75th day day in office—they conveniently forgot all the other times they said that he became president, like when he nominated Neil Gorsuch to the Supreme Court, gave his State of the Union address, and actually became president.

It remains to be seen whether this is a largely symbolic, one-off operation, or if this attack is going to ensnare Trump in a series of escalations, which is what tends to happen when you let the U.S. military get a taste. One retired general told CNN, “This is not like Kentucky basketball—one and done. This is the start of a series of operations.” Despite what practically everyone on cable television said last night, this is a very risky decision, one whose implications will not be clear for quite a while.

It’s possible that, by bombing Syria—particularly in such an unpredictable fashion—the United States can create a real red line in Syria. But it will all depend on what happens next. The situation in Syria may very well be the most complicated international conflict in several decades—the players not only include Assad, who is clearly not relinquishing powers, but Iran and Russia, who are standing beside him for their own reasons. The opposition to Assad is currently dominated by Islamists, which is one reason why the U.S. did not intervene beyond sending small arms before this moment.

In other words, it only gets much more complicated from here. Bringing this conflict to some kind of satisfactory resolution will take an extremely sophisticated diplomatic-cum-military policy. And as we’ve seen again and again over the past eleven weeks, Trump does not do complicated. The risk is that Trump makes the situation even worse by adding another belligerent power—his own.