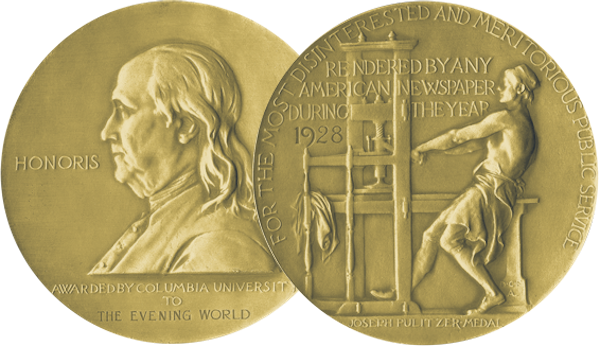 Let’s get this out of the way: The Pulitzers don’t matter, though they’re slightly less chummy and corrupt than they were a few decades ago. What Alexander Cockburn wrote in 1984 is still largely true today: “Year after year this undignified prize-giving ritual goes on, without any apparent qualms on the part of my profession. Why? If bankers gave themselves prizes (‘the most reckless Third-World loan of the year’) with the same abandon as journalists, you may be sure that the public ridicule would soon force them to conduct the proceedings in secret.”

Cockburn has since passed on but Jack Shafer has taken on the mantle of cutting the Pulitzers down to size. “Who cares?” is an incredibly valuable question in journalism, but it’s one many journalists forget to ask as they salivate over Pulitzers—or, more likely, suck up to those who have won them.

For the most part, this year’s Pulitzers went where they were expected to go. Washington Post reporter David Farenthold won for his coverage of Donald Trump’s quasi-bogus charities. Colson Whitehead became the first novelist since Annie Proulx in 1990 to win both the Pulitzer and the National Book Award in the same season, though he was legally required to win the prize. Matthew Desmond won in nonfiction for Evicted, which is the exact kind of book that wins Pulitzers (it’s also, to be very clear, as good as any book that came out in 2016).

The most surprising victor was Wall Street Journal editorial writer Peggy Noonan, who won for commentary. But while Noonan is about as unserious as a newspaper columnist can get—which is saying something—her win isn’t a total shock. Peggy Noonan is like the inverse of that pitch only teens can hear—once you turn 50 you instantly begin to regard her as a serious thinker.