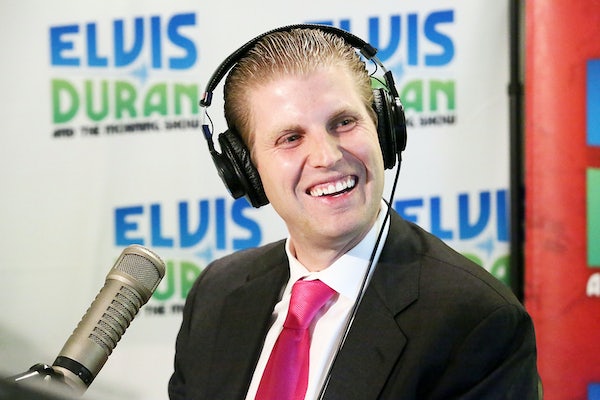 In an interview with the Daily Telegraph, Eric Trump claimed that the administration’s decision to bomb a Syrian airbase to punish Russia-backed Bashar al-Assad proves that his dad is not in league with Vladimir Putin. “If there was anything that Syria did, it was to validate the fact that there is no Russia tie,” he told the Telegraph.

Eric also tried to push the humanitarian line, which the New York Times, among other media outlets, recently ate up. He claimed that his father and his sister, the more beloved Ivanka, were so moved by Assad’s atrocious chemical gas attack that they simply had to retaliate. According to Eric, “Ivanka is a mother of three kids and she has influence. I’m sure she said, ‘Listen, this is horrible stuff.’” (It seems like Eric is not totally sure if his dear sister said anything of the sort.)

But the decision to bomb Syria does not dispel the Russia controversy. The FBI and Congress are still investigating Russia’s meddling in the election on behalf of the Trump campaign. Campaign officials, including former campaign chair Paul Manafort, had ties to the Russian regime. And administration officials, including former National Security Adviser Michael Flynn and Attorney General Jeff Sessions, haven’t been honest about their dealings with Russian officials.

Bombing Syria has certainly helped shore up Trump’s standing at home. (There is nothing quite like the smell of missile exhaust to turn the media in favor of a president with a record-low approval rating.) And there is no question that the White House would like the bombing to steer the political conversation away from the investigation being conducted by Good Hair Haver Trey Gowdy, aka Devin Nunes II. But it can’t solve all his political problems.