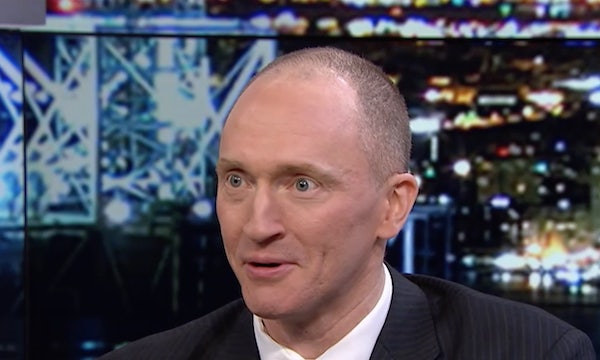 Remember the Trump-Russia story? It’s back.

By the standards of the Trump administration, it’s been a while since a damaging Russia story came out. The last time a news outlet reported on questionable contact between the Trump campaign/transition team/administration and Russian agents was a whopping nine days ago, when The Washington Post revealed that aspiring warlord Erik Prince of Blackwater fame had been sent to the Seychelles, which is apparently the Mos Eisley Cantina of archipelagos, to set up a back channel with the Russian government. The back channel was apparently designed to test Vladimir Putin’s willingness to abandon his Iranian allies and fulfill American neoconservatives’ long-standing goal of bombing Tehran or, if that’s off the table, Shiraz.

In the window between damaging Russia stories, Trump’s relationship with Russia got even messier. Bombing Syria, as Trump did on Friday after being shown pictures by his daughter, put a stop—at least for now—to the administration’s flirtatious dance with Moscow. After spending over a year praising Putin, Trump was risking war with the man he once publicly and pathetically said he wished would be his friend. Secretary of State Rex Tillerson is currently in Moscow but it’s not clear what he’s there to do—that is as much a product of the confusion following the bombing of Syria as it is of the Trump administration’s completely incoherent foreign policy.

But just because the relationship between Trump and Russia has gotten more complicated doesn’t mean that the stories of possible collusion between the Trump campaign and Russia are going anywhere. On Tuesday evening The Washington Post reported that Carter Page, who worked as a “foreign policy adviser” for the Trump campaign and had previously worked for a Russian bank, was being monitored by the FBI, which had acquired a FISA warrant, during the 2016 election.

As the Post noted in its report, this is by far the clearest evidence that members of the Trump campaign were in contact with Russian agents (or at least that the FBI had reason to believe that they were). The FISA warrant, moreover, has a 90-day expiration but was renewed more than once, suggesting that there was reason to keep monitoring Page.

Carter Page—seriously, just watch this guy try to explain himself—responded as only Carter Page could:

“This confirms all of my suspicions about unjustified, politically motivated government surveillance,” Page said in an interview Tuesday. “I have nothing to hide.” He compared surveillance of him to the eavesdropping that the FBI and Justice Department conducted against civil rights leader Martin Luther King Jr.

For sure, my man.