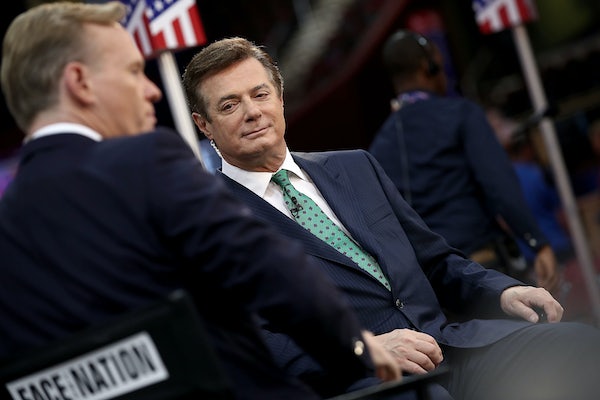 The extent of the Carter Page-Paul Manafort grift is coming into focus.

In 2000 Donald Trump famously told Fortune magazine, “It’s very possible that I could be the first presidential candidate to run and make money on it.” This statement dogged Trump for much of his successful 2016 campaign, with GOP consultant Rick Wilson labeling his effort a “scampaign,” the goal being self-enrichment rather than victory. Regardless of whether or not greed was a motivating factor for Trump (it was), it’s now clear that many of Trump’s staffers—especially in the early days, when few respectable political types would join the circus—were essentially grifting.

Two of the biggest grifters are also exhibits A and B in the Trump-Russia conspiracy: Carter Page and Paul Manafort. On Thursday, The New York Times reported that Manafort and his wife borrowed $13 million from Trump-affiliated businesses on the day he resigned as chairman of Trump’s campaign:

That morning, he stepped down from guiding Donald J. Trump’s presidential campaign, after a brief tenure during which Mr. Trump won the Republican nomination, Democrats’ emails were hacked and the campaign’s contacts with Russia came under scrutiny. Dogged by revelations about past financial dealings in Ukraine, Mr. Manafort retreated from public view.

But behind the scenes, he was busy with other matters. Papers were recorded that same day creating a shell company controlled by Mr. Manafort that soon received $13 million in loans from two businesses with ties to Mr. Trump, including one that partners with a Ukrainian-born billionaire and another led by a Trump economic adviser. They were among $20 million in loans secured by properties belonging to Mr. Manafort and his wife.

This is exceptional for a number of reasons, the biggest being that Manafort secured $13 million in loans on the day he resigned from the campaign for having questionable financial ties. According to the Times, the loans were likely used to keep Manafort afloat after he sunk money into a failed venture with his son-in-law.

This story fits like a puzzle piece with another featuring Carter Page that was published earlier this week in The Washington Post, which detailed surveillance of Page during the election:

In one secretly recorded conversation, detailed in the complaint, [suspected Russian spy Victor] Podobnyy said Page “wrote that he is sorry, he went to Moscow and forgot to check his inbox, but he wants to meet when he gets back. I think he is an idiot and forgot who I am. Plus he writes to me in Russian [to] practice the language. He flies to Moscow more often than I do. He got hooked on Gazprom thinking that if they have a project, he could rise up. Maybe he can. I don’t know, but it’s obvious that he wants to earn lots of money.’’

Page, who seems to be a deeply stupid man, attempted to explain himself this morning. It did not go well.

Hoo boy. Page is not only unable to explain how he came to work for Donald Trump, but also unable to deny that he discussed the easing of sanctions with Russia while working for Trump (which means he almost certainly did).

It is important to remember that no one expected Trump to win when Manafort and Page went to work with him. Manafort and Page are essentially grifters, going from one well-paid con to another, and both saw Trump’s campaign, which they did not expect to be successful, as a way to gain influence that they could then trade for more money. That doesn’t necessarily preclude the possibility that they were Russian agents or the tools of Russian agents, but it suggests that they may have been running their mouths off to Russian agents because they were looking for their next grift. Trump was going to lose, after all, and they had to start looking for the next big pay day.