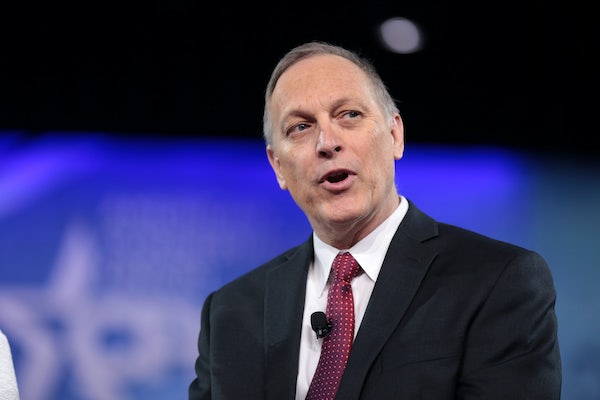 A climate-denying congressman compared himself to Einstein. His constituents booed him.

Republican Representative Andy Biggs was forced to defend his rampant denial of mainstream climate science during a raucous town hall in Mesa, Arizona, on Tuesday. Biggs, a House Freedom Caucus member, made the widely-debunked claim that climate scientists “manipulated data” to prove the existence of manmade global warming. His audience jeered and booed him.

That irked Biggs. “It’s hard to get to the point because you want to shout me down,” he said. As the crowd continued its ruckus, Biggs compared his plight to Albert Einstein, whose theories were attacked vociferously before they were accepted and applauded. “Oddly enough,” Biggs told the audience, “the same attitude you take is the exact same attitude that Einstein faced over physics. That’s exactly what happened to him. They shouted him down until he was able to demonstrate.”

This prompted one audience member to yell: “You’re not Einstein!”

Biggs, who chairs the House Science Committee’s subcommittee on the environment, has never been shy about his climate-change denial. “I do not believe climate change is occurring,” he said in 2016. “I do not think that humans have a significant impact on climate. The federal government should stop regulating and stomping on our economy and freedoms in the name of a discredited theory.” Last month, he helped lead a House Science Committee hearing to attack the legitimacy of mainstream climate science.

On Tuesday, Biggs said he’s “read stuff” from “tenured professors” who disagree that humans are the primary cause of climate change. There are indeed climate scientists who disagree with the mainstream view that humans cause the problem, but they make up only 3 percent of active, publishing climate researchers.