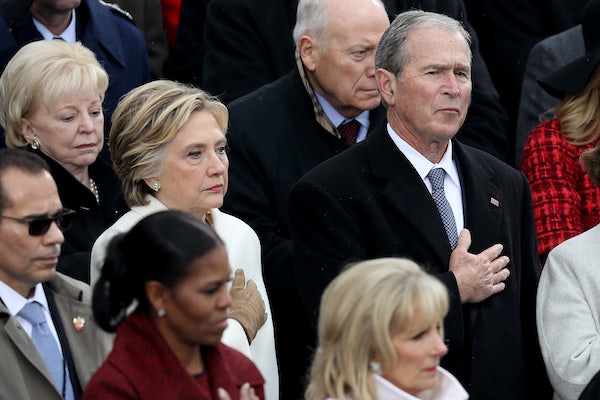 Donald Trump is becoming another George W. Bush—and the media loves it.

After bombing Syria and Afghanistan, Trump is being admired among pundits for his “rational,” even “conventional” leadership. According to the Daily Beast’s Kimberly Dozier, a new “Axis of Adults” has emerged as powerful force within the White House, steering Trump toward a foreign policy position that matches that held by “hawkish conservatives of the Bush administration.”

Secretary of Defense Jim Mattis, Secretary of State Rex Tillerson, and Homeland Secretary John Kelly provide “safe zones” for conservatives looking to join the White House, Dozier reports. The “one potential downside” is friction with Trump’s true believers, Dozier writes—that, and a reckless foreign policy that embroils the United States in quagmires around the globe!

“Campaign trail proclamations yield to Oval Office sobriety. That’s not only to be expected—it should, for the most part, also be welcomed,” Ignatius’s colleague Ruth Marcus wrote at the Post. She applauded his “good judgment” for embracing NATO, the Export-Import Bank, and intervention in Syria.

What could go wrong?