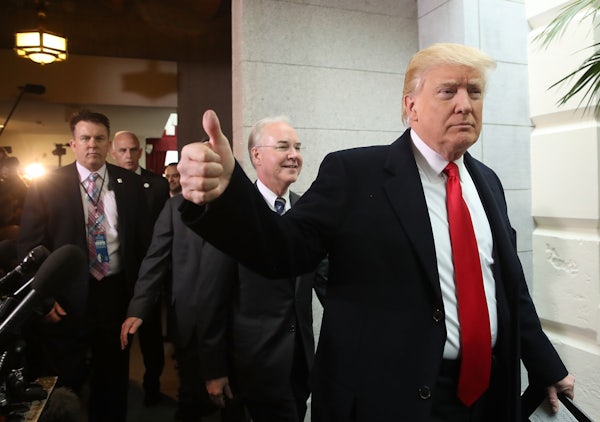 It’s been almost a month since House Republicans’ attempt to repeal and replace Obamacare went down in flames, which means it’s also been almost a month since Trump and Paul Ryan said it was time to move on to something else. But the last several weeks have shown that tax reform and infrastructure are—who could have guessed?—just as, if not more, complicated than health care.

Every week there’s a new report about the House’s various Republican tribes coming together to try to strike a health care deal. This is surprising insofar as the biggest reason the American Health Care Act failed in the first place is that there is little common ground between the House’s hard-right Freedom Caucus and its more moderate members. The Freedom Caucus essentially wants to remove government’s role from health care completely, while the more moderate members—many of whom are very antsy about re-election—are concerned about cost (i.e. lowering it) and coverage (i.e. expanding it).

But on Wednesday evening Paul Ryan said that House Republicans were putting the “finishing touches” on a new health care plan. The deal would reinstate the so-called “essential benefits” provision—which requires insurers to cover a range of maladies and services—and allow states to obtain waivers to eliminate the provision that blocks insurers from raising premiums on people with pre-existing conditions. To get a waiver a state would have to join a federal high-risk pool or create its own. (High-risk pools don’t work.) It essentially just rearranges the deck chairs of a remarkably unpopular bill—there’s no reason to  believe that this bill would do much to lower costs or increase coverage or be any more popular than the earlier draft of the AHCA.

But there is still talk of rushing it to a vote. Congress doesn’t come back into session until Tuesday, and it will have its hands full averting a government shutdown. Why the rush? The Trump administration appears to be very antsy about how its first 100 days will be judged, and health care would be a major 100 days prize.

But the White House basically misunderstands what’s useful about the first 100 days of an administration. The reason why that’s become such an important metric is that it measures the momentum of an administration out of the gate. Every administration, the thinking goes, comes into office with a certain amount of political capital that it accrued by winning the election—that political capital diminishes over time, so there’s a rush to spend it as quickly as possible.

The problem for the Trump administration, however, is that it has already squandered that opportunity. Trump’s legitimacy problems—stemming from his campaign’s relationship with Russia, the fact that he lost the popular vote, and his own personality—meant that he entered office with significantly less political capital than most administrations. The protests that followed his inauguration, his horrific and incompetently executed travel ban, the disarray that has characterized his administration, and the failure to pass the AHCA—all of that used up what little political capital he started with. Rushing to pass health care reform suggests that the administration doesn’t realize that it has already squandered its first 100 days.