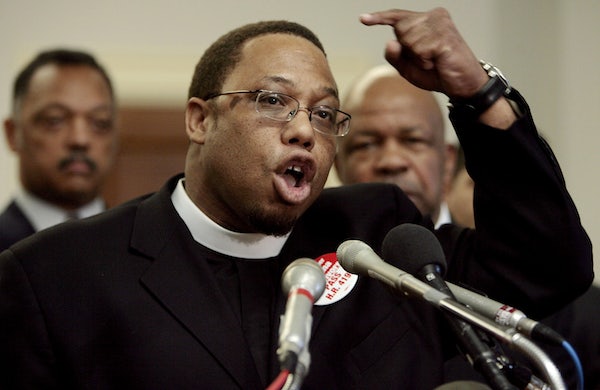 Did black lives matter at D.C.’s March for Science?

Reverend Lennox Yearwood, a prominent environmental justice activist and president of Hip Hop Caucus, says he was “assaulted, roughed up, and detained” by a Hispanic D.C. police officer while attempting to cross the street near the National Mall on Saturday. In a Huffington Post column recounting the incident, Yearwood said he was slammed against a food truck and accused of being “on drugs,” before being briefly detained and then released without arrest.

The officer then ran up to me, grabbed me forcefully by my jacket and swung me around, slamming me up against a food truck. I yelled, “What are you doing? Stop grabbing me”. He told me to stop resisting, to which I responded that I wasn’t. I dropped my umbrella, and put my hands up. I told him I was there for the Science March. He said he had to detain me because I “could be on drugs”. YES, he really said that.

Reached by phone Sunday night, Yearwood said he was physically fine, but mostly hurt by the inaction from the hundreds of fellow Science Marchers who saw what happened. “The crowd didn’t really do anything,” he said. “I saw how quickly they were to accept there was a person of color being detained.” (The Metropolitan Police Department did not immediately return my request for comment.)

Yearwood said the apathy was ironic given the march’s focus on diversity and the infighting among march organizers about how explicit that focus should have been. STEM fields have long struggled with diversity, and Yearwood sees his brief detention as representative of that problem. “Until I unzipped my rain coat and the officer saw my [clergy] collar and March for Science VIP badge, he probably felt that I wasn’t a part of this march,” Yearwood said. “And that was very hurtful. For some reason, I didn’t fit in to him.”

Yearwood is concern that such incidents will discourage people of color from attending large marches for science and the environment. “It is not hyperbole to say, if this can happen to me, than imagine what it feels like for a young person of color who might be coming to a march like this for the first time,” Yearwood wrote.