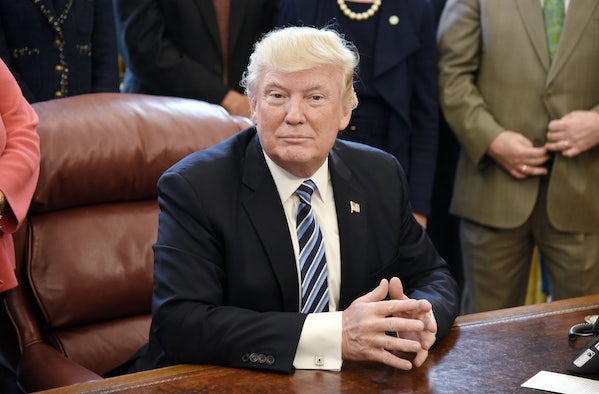 Donald Trump’s presidency is almost 100 days old, and he is not having fun.

Trump’s 100th day in office is on Saturday and the president has spent the last two weeks trying to look busy so voters could be fooled into thinking that his young presidency has not been an outright failure so far. This is the presidential equivalent of shuffling papers around your desk so your boss thinks that you’re doing something, the only difference being that Trump is the boss. In the last week, the administration has picked a government shutdown fight, released a “tax reform plan” that isn’t a plan at all, restarted health care talks once again only to seem them collapse once again, and threatened to start a war in North Korea. Trump has now also done an interview with Reuters, ostensibly to highlight his achievements. But the most damning thing you can do to Trump is publish a transcript of his own words.

Trump says and does a lot of silly things in this interview. He reportedly handed out maps that highlighted his victory in November, proving once again that he’s the only person who still cares about the election. He praised Kim Jong-un for being a savvy operator: “He’s 27. His father dies, took over a regime. So say what you want but that is not easy, especially at that age.” And he acted as if his threat to leave NAFTA—an obvious bluff—was really a masterstroke of negotiation: “I get a call from Mexico yesterday, ‘We hear you’re going to terminate NAFTA.’ I said that’s right. They said, ‘Is there any way we can do something without you—without termination?’ I said, ‘What do you want to do?’ He said, ‘Well, we’d like to negotiate.’ I said we’ll think about it.”

But the thing that’s gotten the most attention are Trump’s comments about the presidency itself (emphasis added).

“I loved my previous life, I loved my previous life. I had so many things going. I actually, this is more work than my previous life. I thought it would be easier. ... I do miss my old life. This—I like to work. But this is actually more work. And, while I had very little privacy, in my old life because, you know, I’ve been famous for a long time. I really—this is much less privacy than I’ve seen before. This is, you know, something that’s really amazing. At the same time, you’re really into your own cocoon because there’s such massive protection, that you really can’t go anywhere.”

Donald Trump, a man who loved campaigning because it fed his bottomless need for affirmation, is not having very much fun as president. And the “I thought it would be easier” jibes with the larger narrative of Trump’s presidency—that he is ill-suited for the job and is an incompetent leader.

But this idea—that the presidency is harder than it seems—is shared by pretty much every president. After leading a successful campaign, many imagine that the same wave that swept them to power will carry them to victories in Washington, which is not true at all. In 2009, Barack Obama, who is fond of talking about how hard being president is, said, “When you’re in this job, I think—every president who’s had it is constantly humbled by the degree to which there are a lot of issues out there, and the notion that one person alone can solve all these problems—I think you’re cured of that illusion very quickly.”

Trump seems to have been cured of that illusion. The one difference is that Trump does seem more naive than most—it’s hard to imagine anything easier than Trump’s old life, at least post-bankruptcy. But this is as close to pathos as Trump gets, even if it’s not exactly reflective.